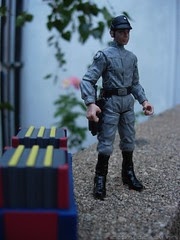 Bio: An Imperial scanning crew checks the Millennium Falcon to make sure no one is on board. The two-man crew brings the scanner onto the ship and quickly discovers the vessel is not as empty as it first appeared to be. (Taken from the figure's packaging.)

Commentary: Good intentions! In 2009 Hasbro planned a ton of running changes for its figure line so that they could get multiple troopers out there with slightly different heads or accessories, encouraging more repeat purchases and making collectors happy. It backfired. The Imperial Scanning Crew figure was one of two figures where the planned variant did not make it out-- the other was the Hoth Rebel, which was recently dumped at Target. (The Ugnaught and Bespin Guard variants both made it to retail in seemimgly limited numbers. A variant Utai was planned but will probably not make it out, at the current rate.) More on the plans for this figure below.

The entirely new sculpt figure has amazing detail, 14 points of articulation, the ability to sit or stand without too much fuss, and extreme buy-ability. For some reason it wasn't a big seller, perhaps the lack of a large environment after 15 years has finally caused people to stop army-building figures for a later purpose. (I know most of my duplicate and triplicate purchases were just in case Hasbro made a big ship or playset for them.) Still, it's a solid figure and you should score two or more of them to invade your big Millennium Falcon. Even though you don't get the entire scanning device through the powers of botched planning, it's a nice start. This is one of Hasbro's best Imperial Trooper figures, and if they repainted the grey bodysuit in black, I'm sure they'd sell an obscene amount of them at retail. Sadly, this is not likely in the short term, but you can probably still find this figure and you should buy it. Even if you ignore the scanning stuff, it's still a nice figure for dioramas or piloting purposes.

Collector's Notes: Hasbro's plan was to release two Scanning Crew figures. One would have one half of the scanning gear while the other would come with the rest. The second half (with variant head sculpt) was never actually slotted for production, it seems, and there is currently no plan to put it out there. With the Vintage line's slim footprint, it might not be showing up in the basic figure assortment any time soon and given there's flat out no plan to release it, it could be a a while.

Oddly, the first version (this one) was really common at the end of the run and I could buy them for under $5 easily. I got at least one for less than a dollar. How sad is that? Hopefully Hasbro's sales of the figure are good enough to warrant the aforementioned unreleased variant would some day make it to retail, in a gift set or otherwise.

Good figure with some minor quirks, like the raised imperial shoulder insignia.

You didn't mention the inclusion of a holster on a character that never sported one on film. I'm not sure whether it was good (place to put his gun) or bad (does get in the way of sitting in some aspects). Though, they could've made it removable like the Bespin Guard.

Also, a Star Destroyer crewman version with mike would be nice, but that'll come by 2017.