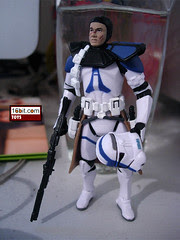 Bio: Palpatine sends secret orders to Commander Vill, who is the clone commander of the 501st Legion on New Plympto at the end of the Clone Wars. (Taken from the figure's box.)

Commentary: The two-line-wonder Order 66 packs were a lot of fun, mostly because we got cool clones like Commander Vill here. Who the heck is Vill? One of the many 501st Troopers running around in the early issues of the Dark Times comic series, which probably is the second-most irregularly scheduled publication next to Chunklet.

The figure itself is made from two other existing releases. The head is basically the 2007 Stormtrooper's head, while the body is a repainted 2005 Evolutions Star Corps Clone Trooper. While not essential, most if not all clone fans seem to have a little bit of love for the 501st Legion. This figure is pretty unique in that he has a covering for his head under his helmet, and has the full "Clone Commander" getup as well. (OK, so did Bow. Minus the removable helmet.) Since the figure is super articulated and looks cool, this one's an easy buy if you think it looks neat. If it's too samey for you, skip it... but I like a little variety in my ranks so this is a figure that I got pretty excited about. Even though I've got dozens of others just like him.

Collector's Notes: The 501st Troopers from the Order 66 packs were hot at the time, but time heals all wounds and reduces some prices. The two-pack should be had cheaply, ten bucks is the high end of pricing. Five bucks is a bit more standard now.

Didn't his kama have special deco too? a logo on the back or yellow highlights or something?