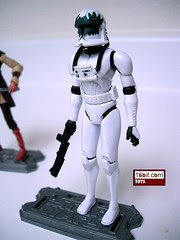 Bio: A clone pilot flies a Y-wing fighter on a bombing mission. The leader of Red Squadron unleashes a new Republic weapon designed to destroy huge numbers of battle droids at one time. The plot uses his innate skill and extensive training to deliver the weapon accurately and defeat the enemy. (Taken from the figure's cardback.)

Commentary: Allusions to other works in the Star Wars mythos are generally not subtle-- some are, but most are only subtle provided you didn't get the root of the joke. Enter Goji. Along with the Zillo Beast, this reference to another famous work of cinema as subtle as Godzilla isn't. (For our younger readers, "Gojira" is the original name of the character and film known outside Japan as "Godzilla.") The trooper-- which is actually quite different from other pilots in terms of construction-- has a newly tooled helmet with green splotches, little yellow eyes, and a "mouth" in the form of its visor. It's adorable, it's awesome, and because we're a Godzilla family, this is a great item to have around. Kudos Hasbro on picking out a pilot that looks cool and has a nice little bonus fanboy factor built in.

the figure's construction is unique-- to date, the three animated pilots are all slightly different in their tooling. (While Matchstick and Odd Ball share parts, they have different head constructions.) Goji shares no parts with his ancestors-- his body is the 2009 "Stone" body with no ankle joints, meaning he's a little thinner and a little closer to the animation models. The helmet is entirely new and, so far, shared by no other figures. If you need some more Clone Pilot figures-- and my massive cache of vehicles says that you (and I) do-- go out and get one or more Goji figures. Because really, how many blatant references to Godzilla are you going to get in this line?

Collector's Notes: Newly released in September of 2010, this figure (at press time) is still more or less available. However, he's only in one wave of Hasbro Clone Wars figures so far and if history is any indication, it might be a while until he makes another appearance. I suggest that you buy him on sight.

I'd really like to see him made as a Gentle Giant mini bust!

Thanks for this post (and the rest of them as well)! I had to run out and buy one after reading about the Godzilla reference. I never would have caught that. I must've looked at Goji a dozen times without even registering what his deco was.