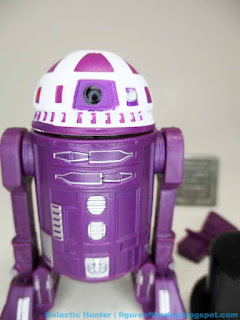 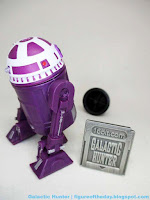 Commentary: Not every figure can be amazing, but at least they can be neat. This white and purple R9-Series Astromech Droid takes a droid that may or may not qualify as canonical - I don't believe this style of dome has made any appearances outside guide books, novels, or other pre-Disney reference materials - but at least it stands out.

The is the same purple body you've seen here before - purple plastic with silver and purple trim! It looks perfectly nice, but not nearly as ornate as what we've had since its release a whopping six years ago. The colors go nicely with one another and it's a perfectly good base for a souvenir robot. I particularly like some off the added purple metallic paint near the dome, which serves no purpose other than looking cool. 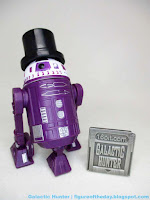 The dome is what makes it interesting - it's white, with some purple panels. There are little painted purple staple-like markings around the dome, plus a black eye and some silver and red elements. There's not much too it. Back in 2015 (and earlier) droids like this felt like they may provide us a glimpse into the future of the moves, but after Lucasfilm redid the droid numbering and Disney stopped making new domes after R7 and R0, it's unknown if this design is still out there somewhere or may appear in a future story someday. I hope so - it's nothing if not pleasingly squished and weird.

From what I hear second-hand, it sounds like droid bins aren't really available at Disney parks any more so you may have to go to eBay to get one like this. I saw one close recently for $10 for just the dome, with complete droids generally commanding $20 or more. This exact configuration recently sold for $60. It's kind of ridiculous - but so is the idea of putting out droids piece-by-piece instead of just letting people buy an overpriced sack of parts. It's not an essential buy, but as a cute little purple robot I rather like it. Get it if you can and the price doesn't make your skin crawl.