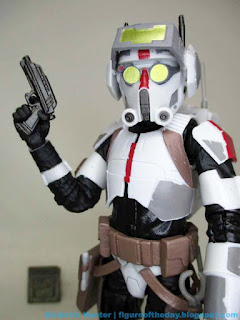 Bio: Tech is the computer and weapons specialist, the most talkative of the group. His genetically enhanced brain can puzzle through technical issues at speeds even faster than some droids. (Taken from the packaging.) 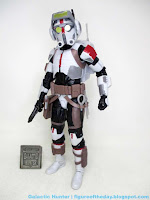 Commentary: This is a good one too. Tech is a character (and design) that seems right at home in a 1980s toy line. The big clunky goggles and headphones - and backpack - remind me of old figures like Dial-Tone in G.I. Joe, with glasses and goggles on his helmet. He looks like a Biker Scout combined with Clone Commandos, meshed with 1980s and 1990s cartoon teams, through the lens of The A-Team. I don't get to say this much, but it feels like you're really getting your money's worth with this one - it's just a pity this isn't a kid's toy line with wide availability so young fans can have adventures with him. It's going to be an in-demand figure for collectors for quite some time and any kids finding it on-shelf will be the aberration.

While not perfect, I really like this figure - thanks to the shift from "animated look" to "realistic look," Hasbro gets to dodge a lot of complaints. It isn't perfect? Well, it's artistic license. I love the little pixel skull on the headphones, but I dislike the glasses are now opaque, hiding his eyes under the helmet. I do like the flip-down visor on the helmet and I'm in love with all the superfluous antennas. Technology has moved so much in our world that we lost dials, knobs, buttons, and other things you'd get at the Radio Shack - Tech keeps that ramshackle look on his helmet. This design has a face that looks to foreshadow elements of Biker Scouts and Stormtroopers, complete with grey and red highlights. I can't even hate on those opaque lenses too much. I mean, they worked for Gendo Ikari, right? 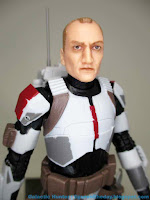 Articulation is good, although the belt gets in the way a bit. The holster for three unique tools is a great idea, but there's nowhere to hold his sole blaster - not even a slot in his removable backpack. (This is an oversight - they could have carved a groove for it to go between the back and the body, out of sight for storage.) The body is great, I'm counting about 28 points of articulation which is roughly normal these days. The face looks a lot like a mutant Temura Morrison, even moreso than the cartoon. There's not much to bag on here. The sculptors did a good job.

Deco could use some work - but again, Hasbro gets to claim creative license here. The armor is clean, while the show has a definitely layer of dirt on it. You'll notice the figure's forearms lacks the red stripes we saw on the show, which I think was probably for budget reasons. The character is a clone of Jango Fett, but for some reason the figure (and the character on the show) are significantly lighter. I'm pretty pale as an underground-dwelling cave person, but this figure seems to be even lighter than I am - a little color would have been good. His hair also seems lighter than on the show, but that could just be a trick of the lighting on most episodes. I'll leave it up to you, but there are opportunities for Hasbro to do a "premium" version of this figure a few years down the road with more deco and the goggles he wears when he isn't wearing his helmet, too. I guess what I'm saying it Tech would've been a better candidate for the $30 price point than Wrecker, who's just a tiny bit bigger than an average figure.

His tools don't have a lot of decoration, nor does his backpack - which drops some of the paint applications from the show. The helmet is great, the blaster is fine, but the backpack doesn't have much going on there. Given how figures are budgeted, I assume something had to be cut - it's not like it's immediately obvious that they colors are missing back there.

Thanks to his tools, decent deco, and plentiful paint applications, I still think he's a good figure. While I would've loved to see more money put into refining his paint job, compare him to other similarly priced figures - he's impressive. Hasbro put a lot into this one, with a great sculpt and relatively few deco shortcomings. This is an action figure that was born to be an action figure - I hope kids can find the Mission Fleet figure, and/or that we get a retro-style one later. And I'd happily pay a little more for one with a bit more gear and a bit more paint.