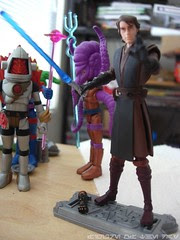 Bio: Anakin continues to use daring battle tactics to outmaneuver the Separatists. The Jedi General is famous for his unusual combat techniques. While his methods may surprise other generals, who prefer more conventional strategies, it cannot be denied that Anakin's plans often lead to victories that the Republic desperately needs. (Taken from the figure's packaging.)

Commentary: This Anakin Skywalker figure is based on the character model redesign from the third season of The Clone Wars, but it seems to be based on a slightly earlier incarnation of the design. The head doesn't quite match the show, but it's still pretty great-- the costume is good, but the proportions are a little off. The shoulders and torso seem to be raised a bit, almost like the arms were placed too low in the body. The right glove is also a little beefy, but it's removable and you can replace it with a robot hand if you're so inclined. The left hand is placed in a Jedi "using the Force" pose, which is a nice touch. Even better, it has individually sculpted fingers, a nice detail that you didn't normally see on a figure of this scale. While not super-articulated, Anakin comes close with 12 points of articulation-- no ankles. The rubber robes are a little stiff, so it seems Hasbro probably designed this one with the notion of redoing him in the future to include cloth lower robes or ankle joints. I expect a revision of this one, but it's still pretty good for now and should go nicely with your revised Obi-Wan and Ahsoka figures.

Collector's Notes: As a new figure you might not have seen it yet. But it's getting around now.