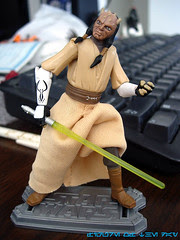 Bio: Eeth Koth is captured by General Grievous. The Jedi Master's cruiser is attacked and boarded by the Separatist general. As a member of the Zabrak species, Koth has a remarkable endurance for pain, a trait that may help him withstand the cruel treatment he undergoes as Grievous' hostage. (Taken from the figure's packaging.)

Commentary: One great thing about Hasbro waiting to release certain characters as toys is that they get better figures. Eeth Koth (and Agen Kolar) are basically the same dude, and this is the only animated version of either so far... and the first new Eeth Koth figure in quite some time. The figure is, for all intents and purposes, one of the finest Jedi figures Hasbro has put out in this line. It's not super articulated but close-- he lacks ankle joints but is otherwise pretty much perfect. His cloth lower robes don't hinder leg movement, and they look pretty good. The hands have no problems holding on to a lightsaber, although I should note they are some of the rubberiest hands I've seen on a Hasbro figure in some time. (Although they have nothing on Revenge of the Fallen Lockdown.)

The sculpt closeley matches the TV show and the detail looks a lot like the animation model, right down to the distinctive design on his armor. I rarely have "I wish they had a Starfighter for this guy" as an initial reaction, but he seems like he would be right at home in a vehicle. This is one of those rare figures that kids should enjoy as much as collectors, aside from the hands I probably wouldn't change a thing. Well, maybe I'd give him a spare lightsaber to plug in to a hole on his belt, but that seems less and less common these days. Be sure you get this one if you see it, because minor Clone Wars Force-sensitives tend to vanish quickly and the price goes up accordingly. (Ask Luminara Unduli, Aayla Secura, or Darth Sidious. Don't ask your mom or wife or spouse or whatever, just buy the damn thing.)

Collector's Notes: This figure is brand new, and as such you likely haven't seen it yet. I got mine from a contact online, but I have seen one in stores as well.

Ki-Adi Mundi, on the other hand...