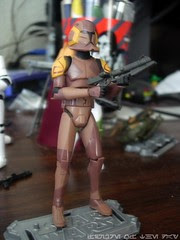 Bio: Clone troopers battle Geonosian drones to stop the production ofm ore battle droids. The special ops clone trooper is a highly skilled marksman. With his DC-15a blaster, he takes aim at the swarms of Geonosian drones that are attacking the Republic forces. (Taken from the figure's packaging.)

Commentary: I think we're long past any sort of consistent naming of these guys, but this Special Ops Clone Trooper is specific to Geonosis and the Landing at Point Rain episodes of the TV series The Clone Wars. This figure is notable for a variety of reasons, not only that he has that unique rusty brown shade of armor, but he also has an as of yet distinctive helmet without the rest down the middle, but with what essentially amount to earmuffs. (You might know what these are. I don't.) Since the figure has a unique deco and a unique head, plus gets packaged with another unique trooper, this should be a set you totally buy-- despite being kinda expensive. If it hits closeout, I'll probably buy a few extras.

The trooper's construction is a mix of new, very new, and old. The body and legs are from the 2008 figures, meaning he has a ball-jointed torso and ball-jointed ankles. The helmet is, of course, new. The arms are similar to the Commander Stone-style, meaning they have swivel wrists and the elbow armor is attached to the lower arm, not the upper arm. These arms restrict the figure's ability to aim, although he can still hold his standard blaster without much trouble. I like this one a lot because unlike so many other figures, I can look at it and know it's something new. If you're into this line, you should get it.

Collector's Notes: This figure was rereleased along with a 2-pack of Waxer and a Battle Droid, so collect 'em all or something. It should still be available at a store near you.

rickybollinger said...
This comment has been removed by a blog administrator.
May 7, 2011 at 2:30 AM

The Stone style arms, while sadly having reduced wrist movement, have improved elbows. Not just in accuracy, but in the ability to bend in slightly deeper than a right angle, something the 2008 arms could barely do. The lower right arm of the 2008 clone had to be turned upside down to bend in optimally, which was problematic with the 212th Clone and others who had stripes paint on one side. Hasbro seems to do that occassionally, make figures where the left arm bends in more than the right.

Filoni said in the unique design of the Special Ops helmet was originally meant for a "Communications" officer, but when he realized that all clones already have built-in com-links, decided to just give the helmets to an entire battalion because he liked the look of them. So the earmuffs have no special function.

Y'know, I had assumed the "earmuffs" were supposed to be an homage to Princess Leia's iconic hairstyle in ANH.