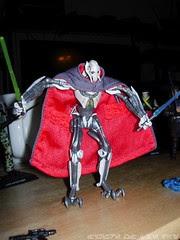 Commentary: I'm pretty harsh on General Grievous figures because as playthings, they manage to let me down in a very significant way. This one is based on the last new movie mold from 2008 which I detested-- it was rubbery, had difficulty standing up, and felt like it could lose its shape if gravity had its way with it. (In other words, don't display it standing up.) Due to slightly better plastics being used-- or so it feels like, anyway-- the figure has had no problems standing (or should I say leaning) on display for the past several months since I got it, which I wanted to do before I wrote it up. He can stand fairly well, and has the same split-apart arms as his ancestor.

The overall design still feels a little thick, with some weird pistons sculpted so that if you bend the legs funny, they'll stick out, it feels like an unrefined design. There are no holes in the feet for use with display stands, either, but Hasbro did create a figure that looks stunning in the package-- as a hardcore loose figure collector, I'd even suggest you pick up a spare just to keep in the box. The real highlight of this piece is its cape, which has pockets to store up to 8 lightsaber hilts. While the neck "clasp" seems a bit much, it still hangs on the figure nicely if you pose him the right way and is an accessory you might want to remove from this release and give to another Grievous figure in the future.

While arguably Hasbro's best movie Grievous in years, it still falls--literally falls-- short with overly thick limbs and bizarre sculpting choices which you probably won't notice until you get the thing in your hands. I like the idea behind the figure, but it still feels like a stepping stone-- Hasbro continues to give us better product all the time, like the 2011 AOTC Clone Trooper, and I'm convinced Hasbro still has a better General Grievous figure for us in the future... even if they don't know it yet. I wrote this FOTD up a few weeks before posting it, and when I checked on the figure-- sitting on an Ultarama display, where it was leaning against a pillar for safety-- I found that it had eventually slid past the pillar and fallen into the shelf behind him. So yeah, this guy can't stand for crap, keep that in mind and consider buying a small doll stand to keep him up. No existing Hasbro stand can help him.

Collector's Notes: A silver-foil carded variation of the packaged figure exists in addition to the normal edition. This figure was packaged heavily in assortments beginning with Wave 2 and its revisions, continuing in the Wave 3 revisions, Wave 4, and Wave 5 thanks to strong kid, collector, and passive fan reaction. I fully expect to see him return in a future revision, because the market really seems to love this figure. It's not all that great though.

I trick I learned with Grievous figures based on this sculpt is that if you crazy glue those weird piston/strut things that stick out from his legs in place, they actually act as stabilizers. (ironic since that seems to be their design purpose, though they're detached nature prevents them from functioning this way on the fig)

I've done this to mine and amazingly it hasn't toppled over since!

I have the previous Grievous that you spoke of. I ended up tying fishing line around him and hanging him from the shelf support above with his feet touching the shelf below. This is easily the most absurd thing I have ever had to do to display a figure. He looks good, though.