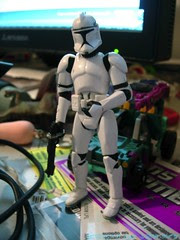 Bio: At the time of their introduction, the Republic Clone Troopers represented the future of galactic warfare. Far superior to the battle droid armies of the era, the Clone Troopers formed the backbone of the Republic's new military initiative that battled against the forces of the Confederacy of Indepenedent Systems. Accelerated growth allows them to reach maturity quickly, and they are constantly trained in fighting techniques, vehicular skills and battlefield tactics, creating superb soldiers molded mentally and physically for battle. (Taken from the figure's cardback.)

Commentary: Hasbro probably has the release of this Clone Trooper figure on a calendar as the day Star Wars collectors got spoiled rotten. Prior to this figure's release, 10 or maybe 12 points of articulation were really something, and we typically got swivel joints and not these ball-joint things. Just a month or so before this figure came out, our Lt. Dannl Faytonni figures were pretty fancy with their swiveling wrists and bending knees. And then this Clone comes along and beat the crap out of everything we ever bought up to that point, kicking off what we now take for granted as a bare minimum in some cases. But the really funny thing about this figure is that Hasbro has just rendered it obsolete in early 2011 with its new "Vintage" Clone Trooper which is the most spectacular thing I've ever seen so far.

Collector's Notes: In 2003 this figure was basically impossible to get. In 2005, Entertainment Earth got reissues (and repaints) of this mold, and after that this figure was packaged along with Anakin Skywalker in a gift set with a Darth Vader carry case. The figure has since been reissued numerous times in Saga Legends so if you want one, there's really no excuse for not being able to get one. It only took Hasbro about four years to put it in regular rotation at retail.

"Spoiled rotten" means the line finally living up to its potential after years of half-assed 70's levels of articulation...heck, I'm being generous...Micronauts were from the 70's. The 90's big plus was adding swivel waists, yeah, 10 years after the original toys ended and that was the best they could do?

Different eras, standards, markets, and prices. Micronauts had fewer molds and a lot of repaints, plus they were largely imported toys developed for another country by (for the most part) another company.

Figures aren't $9 today solely because stores are greedy, new sculpts with lots of moving parts cost money. Sure, they CAN do better, but the 1970s figures were toys and not specially crafted highly articulated collectibles. The modern line... you can make arguments both ways.

Having said that, I'm looking forward to see what, if anything, Hasbro does with Micronauts now that the brand is appearing under their banner.

Expecting that level of poseability (is that a word?) from Kenner's crew was probably lofty for even the 90's, where articulation took a backseat to sculpt for many toy). But knees were do-able. Kenner deserves my scorn for helping bury vintage GI JOE and for making 1000 Batmans with not so much as knee joint, because Batman doesn't run after anyone, I guess. Which would be ignorable except the raised the bar with 80's SUPER POWERS (which had knees with no visible knee peg!), and even gave wee little M.A.S.K. figures knee joints. And shoot, Toy Biz's bad looking DC line had knees. Comm Tech Han Solo is about what they should've done in 1995, knees and maybe some swivel arms (Not those horrid angle cut elbows.)

Of course I've read comments from current collectors say that "knees are worthless without ankle joints". Those people were never children, just adult geeks in kids' bodies. My interest in toys did not orignate with posing figures on shelves.

I've read a few collectors say that when they were kids, Star Wars took a big backseat once 3 3/4" GI JOE appeared. Obviously, interest waned due to the trilogy ended and kids being fickle but some have said that more articulation was a reason.

The price argument doesn't work for me. There's barely poseable toys from other brands that either justify $7+ cost with a gimmick or something else (Remember EPISODE 1 COMM TECH figures were $8 figures some place?). If you reduced articulation on Star Wars products, there would likely NOT be noticable price drop, especially with the way things are going in China. It's more of an iritating posibility that articulation will take a hit as Hasbro tries to maintain current price points in light of China raising the cost of toy production. (The Battle Packs being reduced to 3 figures is a grim tiding.)

If that happens, you will among the faithful still buying (that's not an insult; you are clearly bigger SW fan than me). I will be done with Star Wars at retail. I probably won't be alone.

The price is basically up to Hasbro-- they charge what they want. The COST would be reduced, if Hasbro made cheaper toys with fewer moving parts or features, the question is if they'd be willing to do that. In 2002 they went from $7 to $5 in an effort to make the line a hotter prospect, and it worked. We saw $5.24 as the basement price again in 2005, and since then it's been $6.99 and up. Hasbro can manipulate the price as they see fit.

The question of why does a figure need joints is one we as collectors rarely ask. (As always, if you're a carded collector, I have no need to listen to your opinion on joints.) The joints aren't there to make the figure "better," at least in the 1970s and 1990s. They were there to make the figures compatible with the other toys in the line, and back in the Vintage Kenner days they changed the ships/beasts (see: Dewback, Speederbike, Tauntaun) rather than re-engineer the figures.

In the 1990s we saw a mix-- the Scout Trooper of early 1996 had knee joints to look truer to the movie, but the standalone figure suffered. In the 2000s, Hasbro brought back 3 3/4-inch G.I. Joe with new sculpts and Star Wars-style T-crotches, which rendered them unable to ride a motorcycle. (They quickly reengineerered the figures.)

No toy figure NEEDS knees or ankles or wrists to be great. It doesn't hurt, but look at how they are played with. Kids still buy Star Wars, and Barbie, Playmobil, LEGO, etc. Playmobil has had figures with vehicles and accessories since 1974, and while they did eventually add wrist joints for steering wheels and other handheld gear, their legs are a single piece of plastic and they have shoulder and neck joints. And that's it, and they work fine.

Likewise, most (not all) Star Wars figures work fine be they made with 6 or 16 joints. Some don't-- a number of Rebel Pilots fail as toys even with 14 joints due to dangling grey straps below the waist which make it hard to cram them inside a vehicle, while the 1990s Rebel Pilots-- all of which have admittedly dated sculpts-- all fit PERFECTLY in X-Wings, Y-Wings, and so on.

From where I come from, I don't collect "action figures" and I don't collect "Star Wars." I collect toys-- and since 2006, Star Wars hasn't done as well as playthings, cost be damned, figures with arms that pop off at the joint, lightsabers that snap easily due to removable blades, and other nonsense have made this less of a line for children and I find that depressing. If I wanted a perfectly engineered super high-end collectible, I'd look at Sideshow or RAH. I want my Hasbro figures to function as toys, and sometimes they do, and sometimes they don't.