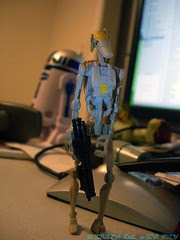 Commentary: If you can't get enough of the Battle Droid figure (or this mold) then you are going to love this one. The first of the Saga Legends repaints of this particular character, the Battle Droid Commander was exquisitely detailed and covered in dirt, yellow markings, and some silver on a few points too. Basically, Hasbro peaked as far as this mold goes in terms of deco right here. I wish they'd apply it to the new, even more poseable molds.

For those of you keeping track, this is the mold which came off the 2002 "Deluxe C-3PO with Battle Droid" set. The head, arms, and legs pop off at the joint, plus there's a backpack. You can swap limbs and make junker droids too if you want... and I think you do want. Get this one, if you only get one Saga Legends Battle Droids pack, make sure it's this one.

Collector's Notes: This set shipped on and off for a while, and the price on eBay seems to be going up-- somewhat unusual for Saga Legends. If you can get this set for $10 or less, I'd say you should make sure you get one. Or two. It's a nice set.