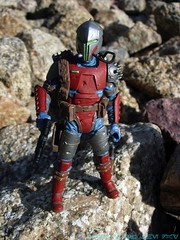 Bio: Rohlan Dyre was a Human male Mandalorian Crusader and a former commander who fought in the early skirmishes of the Mandalorian Wars. He deserted the wars multiple times in an attempt to find answers pertaining to the war itself. (Stolen from Wookieepedia.)

Commentary: When Hasbro approached me with this wave as an exclusive for my day job at Entertainment Eart, I didn't realize that Rohlan Dyre would be the best of the wave. Truth is, I was excited to get Baron Fel with a decent head sculpt. This great ancient Mandalorian turned out especially well, with a removable helmet, amazingly detailed armor, a removable knife in his boot, a blaster in his holster, and a backpack. Really, you can't beat that for a comic pack figure. I'm surprised Hasbro didn't just hold back on him and sell him carded as a Vintage figure... it's certainly cool enough.

The sculpt of this Knights of the Old Republic comic book figure is wonderful. He has pits in his armor, gashes and cuts, little sculpted rivets (check out his back if you got one), loads of straps, wrinkles, creases, and other stuff. There could stand to be a little more dirt on the figure, but even as a clean release this blue and red armored warrior is pretty slick stuff.

Under the helmet is the character from the comic, complete with scars. I think the sculpt is wonderful, but the painted "scar" seems to clash with the character's dark skin a little much. It's not very subtle, like on Jango Fett figures. He's got nice hair and a decent expression, and my guess is Hasbro scarred this guy and made him meaner as a reaction to the Mandalorians sold in the Elite Forces of the Republic set a few years ago. There's no mistaking this guy for an accountant or an engineer, the dude under the helmet is a mean warrior type. As such, he should be welcome in your collection.

Collector's Notes: Hey, I sell this at my day job. You should buy one, support both this site and my employer so I can afford to spend more time writing about toys for you. I can't get too specific but it is indeed a limited edition.