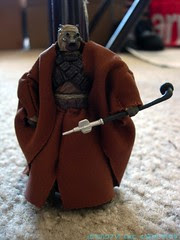 Bio: Tusken Raiders are fierce desert savages that keep to themselves, and are a terrifying presence to the colonists that live on Tatooine. Swathed from head to toe in rags and robes, Tusken Raiders brandish their bladed clubs called gaderffii sticks with menacing skill. Also known as Sand People, these aggressive nomads dwell in the rocky Jundland Wastes of Tatooine and ride single file on banthas to conceal their numbers. (Taken from the figure's box.)

Commentary: This Tusken Raider is the great 2006 Vintage figure with new deco and new fabric elements. Rather than the wrinkly, bunched-up tan material we now have flat red material covering the figure. It looks less realistic, but it appears completely different from the previous release. The gaffi stick is a great accessory, and the sculpted elements of the figure's body are now a dark reddish brown color while the head is pretty much the same thing. The articulation is identical to the Vintage release.

I like this figure-- and set-- less than I like what it represents. I'm so totally excited when Hasbro can expand the Star Wars universe with its toys, so things like Mini-Rigs (when done well) or the creation of this new clan of Tuskens is just something that makes me smile. I hope we see grey or black clans some day too, or even more of the reds would be nice. I don't think most fans are going to want these, but I find the whole thing quite exciting. Get them if you like fun!

Collector's Notes: If memory serves, Hasbro said there was an even split between the "beige clan" (i.e., original colors) of the Tusken Raider battle packs and the "red clan." The red clan was the second release, and I saw plenty of both spread across multiple cities in the southwestern USA. The red clan Tuskens have not been repackaged or sold elsewhere as of yet.

Nice idea, but the head should have a reddish deco that ties in the rest of the figure. Doesn't quite look right.