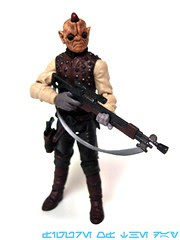 Commentary: Cantina aliens are a tricky thing-- we love them, we demand them, but as a group we don't always buy them. The last new ones came out around October of 2009, but stuck around until shortly after Vintage launched in 2010 in some markets, meaning it was really no shock that Bom Vimdin is the first (and so far only) Cantina alien released in 2011. With 14 points of articulation, plus a working holster, fans should have little to complain about as engineering goes. The figure can stand, point his rifle, sit, or do whatever. It looks better than most aliens, even ones where Hasbro has significantly more reference material. The gloves are just so perfect, the knobby vest looks genuinely wonderful, and the pants feel aged. The same can be said for the face, which is wrinkly and a little dirty with the trademark horn in the forehead, giant eyes, and pointy ears.

Generally speaking it seems Hasbro put a little more work into Jabba's Palace aiens, but this time it seems this Advozse figure has trumped them all. This guy would be right at home in Jabba's Palace or your Cantina display, and he has enough gear to be exciting in almost any scenario. If you have the chance, get him-- he's great. A quality figure, I hate paying $9 for a figure but the amount of detail on this guy is pretty incredible. Get it.

Collector's Notes: Between Hasbro solicitation typos and trading cards, it seems most of us don't know how to spell his name-- myself and the authors of several books included. It is, in fact, Bom Vimdin with 1 D and 1 N in the last name. (I always saw it as "Bom Vimdim." This is the only version of the character so far, but there's another outfit-- in addition to the knobby brown vest, there's a version with a smooth blue vest and a light blue shirt in various Cantina photography, presumably from the Holiday Special. Check Wookieepedia for pictures. So hey Hasbro-- if you're willing to sculpt an alternate torso, you can repaint the rest of the figure and get a totally different outfit.

THIS is what the Star Wars line needs. I realize that the core characters are recognizable, but it's the alien sculpts that keep the collectors in the game. I'm down to only buying a few now and this one is an automatic.

Absolutely. Hasbro needs to get more awesome aliens like this out. Solomahol would be fantastic and something totally different they could do.