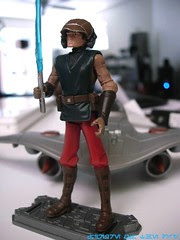 Bio: Anakin disguises himself as a Naboo pilot to escort Padme on a mission. He conceals his identity while secretly guarding the senator, who takes on the dangerous assignment of spying on a colleague. Sleek and elegant, the Naboo star skiff is covered in gleaming chromium and armed with blaster cannons to discourage threatening encounters. (Taken from the figure's packaging.)

Commentary: I initially expected the Anakin Skywalker from this set to be a pre-paint, an example of Hasbro giving us a redeco before the "real" figure. The fact that we still have no Captain Typho has proven me totally wrong so far, as the outfits are pretty similar. Anakin is articulated at the neck, waist, shoulders, elbows, wrists, and hips, making him a good figure and an exceptional figure as pack-in pilots go. He can bend just right to sit in his vehicle, and the sculpt is basically exactly what it should be. The removable helmet is nice, the head sculpt is good, and the coloring ain't bad. There's some great detail in the boots, and the red plastic really looks good as it seems to have this wonderful texture that brings it to life. I like this set, and it's nice to see another "in disguise" figure for a change. It's a great way to satisfy people who want a new figure with Hasbro's desire to keep cranking out the most popular characters in new forms.

Collector's Notes: I like this figure and I like the vehicle as well. These items will be packaged under a new assortment SKU and a new product SKU this August or so as Hasbro resets the line-- it should be the same toy in a smaller package. If you're a fan of the Kenner Mini-Rigs from 1981 or so through 1985, this is a must-buy. The Naboo Star Skiff feels like the best spiritual descendant from the 1980s Kenner-designed mini-vehicles, and if I could find a way to vac-metalize this cheaply I'd arrange for someone to do that. (I hear companies in China and Asia do this with Zoids kits all the time. This ship would be awesome all chromed out, don't you think?) Also, it looks like this item will be repackaged in a new 2011-style box at a lower price.

I don't own the figure.

My comment is that there's an annoyance with The Clone Wars toys. You can't expect them to complete a scenario in toy form, like you might with realistic style SW figures. They'll make this for Clone Wars, they won't make the guy Padme spys on, and likely not Padme in formal attire. They made Mandalorian Police Man, but not Dutchess Satine. They are making Chewbacca, but will they make Trandoshans?

Makes it hard for some people invest money in the line.

You kids and your short-term memories.

A limited suite of figures doesn't mean the toy line has a problem. Star Trek: The Next Generation had a decent (albeit short) run with lots of minor characters. Star Wars managed to do all 3 films with about 100 figures. "Some" is acceptable, it's not like "all" is necessary for a line to be good or a hit. You can discard taste, just factor in rarity (ARC Troopers Battle Pack, Hondo Ohnaka) and the fact that the (debatable) core audience-- kids-- don't collect. They maybe only get 5-10 figures. Not all... 120 or whatever we're at right now.

I went through my childhood in a world with 4 Cantina aliens and no Grand Moff Tarkin. Didn't hurt my fun times in the slightest.

Why whine about what you can't get when you can just enjoy the weird stuff that they DO give us? I've got a Gha Nachkt sitting near a giant Slave I and an awesome Nahdar Vebb figure. Plus other stuff. The line's in no danger of ending, so I'm not planning on fretting over what DIDN'T happen until we know for sure the line is over. And we got a few years there. My toy box isn't just half-full, it's overflowing into the living room.

I wasn't saying the line wasn't sucessful; I was saying some people don't want to get into collecting it because it seems like that a lot of significant or memorable characters won't arrive in toy form. Hasbro's ACTUAL Q&A RESPONSES back this up, unless they like to lie a lot. And that doesn't help people on the fence of collecting/not collecting.

But if you want to shrug off others' opinions so dismissively and say "it's all good" in a gushing glee, fine.

Meanwhile, I'll be working on a 1000 word essay on why the removal of the Secret Weapons from Saga Legends releases is a crime against humanity, the universe and the almighty Flying Spaghetti Monster.

Dismissed argument? I'm engaging you, despite your not talking about the figure in question and using it as a jumping-off point with my third-rate largely unread toy column as the ombudsman as what should probably be a forum post or a letter to Hasbro. I'm paying attention here.

It's unlikely "on the fence" is going to be turned into a hardcore collector because of a minor character. The best Vintage sellers in particular were the likes of Vader and Boba Fett repacks over collector-focused newness like the Cloud Car pilot. Last year anyway. I think we can all agree this year is a much more confusing/unpleasant matter where, seemingly, nobody is winning with the distribution as it is.

Clone Wars is STILL delivering minor characters at a pretty rapid clip. If you discount Clone Troopers, about 16 of the "new" 2010-2011 line figures were reasonably minor characters. Out of 50 figures packed with repacks and clones galore, I'd say that's nothing to sneeze at. The last waves were largely 1-3 episode wonders. I'd love more too, but the rate of release seems on par with (or better than) similar kid-driven cartoon lines in terms of variety.

I want to see a Satine too, but my guess is that'll happen as the collector interest goes up (which eBay says it is) and as the pool of "new" characters shrinks (which may be tricky as the show builds its "cast.") Maybe by then they'll find a better way to do the arm articulation and/or dresses.