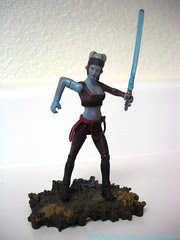 Bio: Aayla Secura is an empathic and highly intelligent Jedi Knight with impressive fighting skills. During the Clone Wars, she leads a battalion of clone troopers against the Separatist forces on the planet Felucia. (Taken from the figure's packaging.)

Commentary: This 2005 Aayla Secura action figure is so close to perfect it's infuriating. Hasbro did a wonderful job here, especially considering what it cost and what her peers looked like. The figure's sculpt is excellent-- her arms seem a smidgen thick but still great. Her blue skin has a little schmutz on it, and her shirt looks a little bit like leather. The texture is really nice, as is the sculpted fabric on her pants and... that flap in front of her crotch. What is that, a tabbard? Tabard? I don't know. I'm writing this on an airplane and can't check. Damn you, reliance on Google.

The figure is, on paper, super-articulated and a massive upgrade from the 2002 release. Her legs are about as perfect as you can get with ball-jointed knees and ankles, the waist pivot is right where the shirt meets the belly. It's perfect. The only shortcoming here is in the arms, as the ball-jointed shoulders and swivel wrists are slightly marred by the lack of ball-jointed elbows. The head sculpt is pretty great, and my favorite feature on this one is the lightsaber hilt which can plug into her belt. Awesome. The only better Aayla figure to date is the animated Clone Wars one, because she has a ton of articulation and space gear.

Collector's Notes: First released in 2005, this figure got a few releases in future Battle Packs. But without the cool stand. The stand is unique to this carded release, and the deco of this base was not used on any other releases of this display stand.

Hey Adam, when can we expect the new vintage collection aayla secura?? do you think it will be an all new sculpt? Keep up the great work.
Crazy Wan Kenobi