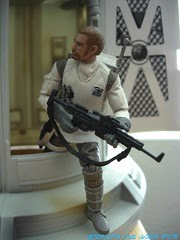 Commentary: This Rebel Trooper was issued twice in two exclusive sets over the course of about three months-- that's unusual for a figure with exclusive deco. Modeled after the 2009 carded Legacy Collection Hoth Rebel Trooper, this version has a slightly lighter shade of brown for his facial hair. He's still super-articulated, and really a great addition to any army builder's collection. Actually the whole set is pretty slick, with troopers and droids plus a bunch of fun big hardware to add to your snow dioramas. The figure itself has a great sculpt with soft goods around the "skirt" region plus a working holster for his pistol, making it a pretty swell figure that really could have (and should have) been sold carded. I mean, I'm pretty sure both you and I would buy more of these.

It's one of Hasbro's finer Rebel figures as of late, so if you have the chance to get him in this or another exclusive pack I suggest that you do so. You won't be sorry!

Collector's Notes: This figure is pretty swell, if you like such things.

Email ThisBlogThis!Share to TwitterShare to FacebookShare to Pinterest
Labels: Exclusive, Rebellion, The Empire Strikes Back, TLC

Yeah, it's an okay figure, and it was good they recolored the hair. However, I tire of the revisionist history that Hasbro takes with non-character head sculpts. Someone point any Hoth Rebel background player with "van dyke" facial hair to me. I seem to recall actual beards, 'staches and clean shaven types. Instead of those, we get what facial folliciles are popular now. (This sure as heck applies to the current Rebel Commando, as well as some past Rebel Commandos/Endor troops, too.)

They don't always do that, Rebel Honor Guard and Death Star Trooper felt right. But it's a recurring joke that whatever Rebel trooper comes out will have a goatee or whatever...I bet they really, really wanted to put on on the Rebel Fleet Trooper...maybe for a rerelease. Ha.

And, yeah, yeah, long time ago, galaxy far, far away, whose to say some rebels didn't look like this guy? I know that. And I don't care.
This is Star Wars, not GI JOE, stop with the employee head sculpt tributes.