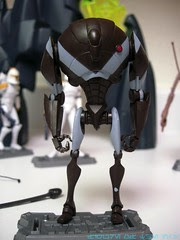 Bio: These heavy infantry droids are powerfully built, heavily armed and very strong. Some versions are specially equipped with flight packs for aerial combat. (Taken from the figure's packaging.)

Commentary: I wish Hasbro would do even more repaints of the Super Battle Droid from The Clone Wars action figure line. Dropping the snap-on rocket launchers of the 2008 release, this figure takes that mold and repaints it into a striped version similar to the Mygeeto droids Hasbro put out a few years ago which were inspired by the Utapau Shadow Trooper action figures.

The really cool thing about this figure is Hasbro managed to "upgrade" this figure by using paint. Not only is it a dark armored figure with stripes and a big red dot, but if you flip him over there are yellow "jets" on his back. Just by slapping on some yellow paint, Hasbro gave this guy new powers. I love that. It's such a neat design, and you owe it to yourself to grab this set to see one for yourself. Well, that and the Retail Droid, which is basically a soda can with feet and guns. I love that too.

Collector's Notes: This redeco is one of my favorites. The set itself is quite common, plus it has some clones and another droid in it. It's big fun, and I say you should get one-- but you might want to wait, it seems common enough where the price may drop on the secondary market.