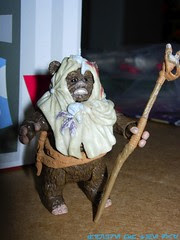 Bio: Nho'Apakk and Paploo are two of the Ewoks who inhabit the forested moon of Endor. Like all Ewoks, they prefer to avoid confrontation but are fearsome warriors when threatened. They fight alongside the Rebels to subdue the stormtroopers during the Battle of Endor, ultimately helping to defeat the Empire. (Taken from the figure's packaging.)

Commentary: One of the most-requested figures for an update has been Paploo. The Power of the Jedi release was done specifically to fit on a Speeder Bike and reused Wicket's body, so this one... well, it reuses another Ewok body, but it looks more normal. The head, headdress, belt, and staff are new scultps but we've seen the body a few times since 2007. Jointed at the wrist, ankles, shoulders, neck, waist, and hips, this figure has better articulation than any previous Paploo toy. The head sculpt seems to be liked by some and not by others, but there's no doubt that his gear turned out great. The staff has a lot of great detail, with a painted grip and other minor flourishes, and the headdress looks like it stepped right out of the movie... and was turned into rubbery plastic. It looks good, though! Plus the belt! Don't forget the belt, because it has a removable knife as a bonus weapon. To think, this figure was packaged with a second full Ewok figure for the asking price too! It was also the final such 2-pack to date, as it seems all new Ewoks are singles from here on out. Oh, the end of an era!

I like this Paploo more than the previous release, but not as much as the first Kenner figure in the 1980s. They're all neat and good for different reasons, and I'd suggest getting this one simply because I suggest every Ewok as a worthy purchase.

Collector's Notes: Ewok figure 2-packs always do well at retail, meaning they aren't totally worthless. If you want this set today, it'll cost you $15-$20 despite being somewhat easy to get back in 2009 when he first hit.