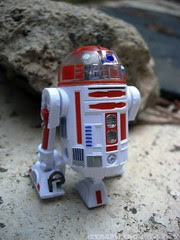 Bio: R3-A2 was an orange R3-series astromech droid. It was seen in the Rebel base during the Battle of Hoth. (Stolen from Wookieepedia.)

Commentary: It's rare that astromech droids get more than one toy unless you're R2-D2, but one of the few minor robots to get the second shot at plastic was R3-A2. His first release was a repaint of R3-T7 for Toys "R" Us, but the 2009 figure had better proportions, more accurate deco, and a nice clear dome. With the wide variety of deco in astromech droids, each of the two R3-A2s are different enough where you could probably consider them different droids, so robot fans should see both figures as absolutely essential to their collections. The Saga version sold at Toys "R" Us has an orange box around his central eye, while this version has a largely clear "face." In the movie, the face was clear, so the newer one is clearly (hah) the better of the two. The coloring has gone from orange to more of a reddish orange, and the white plastic is also a little brighter.

Like other astromech droids of this build, he has articulated ankles on his outer feet, a removable third leg, and the usual arm/leg and dome articulation. It's a great little figure if you like these kinds of figures (and I know that you do), so be sure to get one for your Hoth dioramas some day soon. I wouldn't classify it as a remarkable piece, but it's very good and I can't complain about it. (That's high praise.)

Collector's Notes: This figure was packaged with the Star Wars wave of late 2009, and parts of him were packed with 8 different figures-- some of which got to be pretty cheap on the clearance racks of 2010. I wouldn't suggest dropping more than $7 or so on him, just because the individual figures to build him should be $5 or so each-- and really, why not get yourself a whole bunch of figures? Currently, he goes for about $10.

With all credit to http://www.angelfire.com/droid/astromechs/page7.html, the paint configuration of the back of the two R3-A2 figures corresponds to (or at least is close enough to) two different astromechs seen on screen. See the section starting "The Case of the Orange R3s."