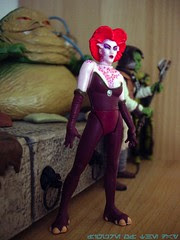 Bio: Rystáll Sant was a dancer for the Max Rebo Band. She was a near-Human hybrid, born to a Theelin father and a Human mother. (Stolen from Wookieepedia.)

Commentary: Do you know and old lady when you see one? I didn't. Rystall had a cameo in Revenge of the Sith but you first met her in the 1997 Return of the Jedi rerelease. The figure was more or less normal for her day, which is to say you get 6 points of articulation. She has no problems standing, but her pose is very dance-specific. I guess she makes a convincing singer too. The figure's sculpt is quite good, with lots of winkles, feathery hair, and-- to say the least-- distinctive hooves on her feet. The purple figure is really colorful, particularly for Jabba's Palace with its many earthy browns. While she can't hold anything in her hands, the figure is pretty much required for a cool Jabba's Palace diorama. (Yes, even if you hate the Special Editions. Those new aliens were pretty cool, you have to admit.)

Collector's Notes: The set was blown out from Hasbro/Kenner around 2000 and was available for cheap online for years. She was also reissued in the 30th Anniversary Collection line in a set of mixed Jabba's Palace Max Rebo Band boxed sets with no significant changes. As such, if you want one, you can get one. The entire set of 3 dancers now sells for about $7. I've seen auctions close for a sealed box sample of this set for as little as $4.