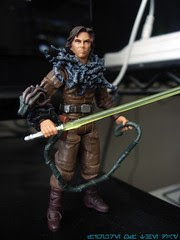 Bio: Jacen Solo is the son of Han Solo and Leia Organa Solo and is gifted with the ability to communicate with animals. He uses this gift when battling the Yuuzhan Vong: he calls amphistaff serpents to him, and they encircle him to form protective armor. (Taken from the figure's cardback.)

Commentary: In 2009, as the year was winding down, Hasbro bumped a couple of waves into 2010. The bad news is that this meant 2010 was really boring, and the worse news was that Jacen Solo and the other figures from this wave were bumped to exclusive status, shared between Toys "R" Us (which got a 30-day window) and the dotcom market.

Rather than sculpt an entirely new body, Jacen uses a 2007 Vintage Bespin Luke body and gives him a new head with new gear. The darker outfit looks much better than it did on his uncle, and the added Yuuzhan Vong-inspired gear helps hide the fact that this excellent figure is 80% recycled parts. His lightsaber is green which, I guess, is fine and the junk around the figure's neck is a nice touch. It's a pretty great figure, and I'm sure fans of the novels will consider him a required purchase. As my excitement generally comes from the more visual aspects of the franchise, I was less enthusiastic about Jacen when compared to, say, K'kruhk.

Collector's Notes: I think I saw one of this figure on shelves once. There was a lot-- and I mean a lot of whining about this wave's distribution at Toys "R" Us, but the online supplies seem to have been pretty extensive if you actually ordered on time. For those hunting only at brick-and-mortar, though, this wasn't exactly easy to get.

Pretty slick figure for someone low on the totem pole. But I lucked out on this wave; not only did I find it at TRU, but it was during a BOGO1/2off sale.