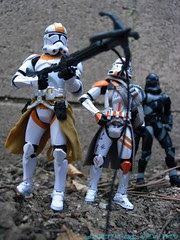 Bio: Clone Troopers display more than "Routine Valor" during a battle on Sarrish. When their Republic gunship crashes near a dangerous gun emplacement, the clones launch an attack to capture the promontory on which the gun is anchored. Although the odds are against them, the troopers dont hesitate to take on the deadly challenge. (Taken from the figure's packaging.)

Commentary: Part of the last retail wave of comic packs, this orange Clone Trooper Lieutenant takes pieces of a few existing figures and bashes them together into this unique ranking officer. The kama is similar to the ARC Trooper one. The helmet is similar to the Evolutions sculpt. And the gun? Well, that's new. The blaster rifle has a hole in the barrel which can hold a grappling hook. It doesn't fire or launch, but it just looks cool. The figure has modified 212th Battalion orange markings, and is a pretty clean design. There aren't a lot of dents or dirty marks, making this figure look somewhat pristine. I don't consider the figure a required purchase, but if you have a need for big armies with lots of variety you need to buy this set.

Collector's Notes: While this wave of comic packs tends to be somewhat expensive, this set doesn't seem to be too bad most of the time. If you can get it for roughly retail, you should. Otherwise, just settle for some basic orange clones, and you'll probably be just as happy. The most exciting thing about this one, for me, is the grapple gun.