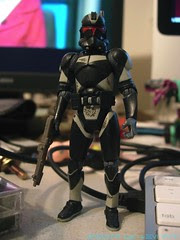 Bio: These specialized troopers pose as bounty hunters or mercenaries to slip in and out of locations, quietly gathering vital information for the Republic. (Taken from the figure's packaging.)

Commentary: When the Jedi-Con exclusive Clone Trooper set was announced, I went from infuriated to indifferent in about five minutes. "How dare they give a German convention their own exclusive!" I thought. "We're the biggest market in the world, at least share the damn thing!" In no time Hasbro revealed this would be sold on ShopStarWars.com... and it would stay there for a few years, getting marked down, because it wasn't selling through.

Based on the 2005 Clone Trooper body (III-41), this "bounty hunter" figure is based on the 2005 Utapau Shadow Trooper which was a Target exclusive. This one has more vibrant colors, the red visor is much sharper and the light grey paint is much brighter. There's dirt on the body, he still has the removable antenna, and his gun is a unique light grey color. (The Target Shadow Trooper is the 2003 AOTC Clone Trooper body with a new helmet and new deco.)

Collector's Notes: If you want this set, you should be able to get it fairly cheap. Do not over pay for this one unless the market demands it. Do some research first.