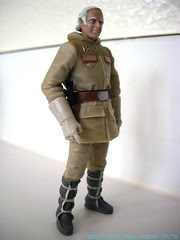 Bio: Hailing from the prosperous planet of Ralltiir, General Pharl McQuarrie watches as his world is crushed in the iron-fisted grasp of the Empire. He joins the Rebel Alliance and helps establish the Rebels' new base on Hoth, working closely with his friend Jeroen Webb. (Taken from the figure's packaging.)

Commentary: In 2007, Hasbro took its Major Derlin mold and slapped on a new head. The result is General McQuarrie, another in a long line of behind-the-scenes people getting an action figure. He retains the holster, and the articulation is the same as Derlin-- 10 points, with cut joints at the wrists and elbows. While some fans took issue with the lack of ball joints, it's certainly good enough for the character. He can still man a giant gun, or hang out in front of a Snowspeeder. The uniform sculpt is adequate, combined with the texture of plastic used it looks pretty good but it's still obviously a toy. A little more texture on the uniform would probably make it feel like a better figure, but since Hasbro was reusing an existing body there wasn't a whole heck of a lot they could do to improve it other than the head.

Speaking of the head, the figure also has a thermal hat accessory. I prefer to leave it off, as it doesn't fit too well and it blocks the view of the Ralph McQuarrie head sculpt. I hope we see more cameo figures as the line goes on-- we got a few George Lucas toys, maybe we can get Ben Burtt or Matt Wood next.

Collector's Notes: The figure sold pretty well, although he did hang around despite shipping in only one wave. He has not been reissued and I don't expect that he will.

Email ThisBlogThis!Share to TwitterShare to FacebookShare to Pinterest
Labels: Rebellion, TAC, The Empire Strikes Back