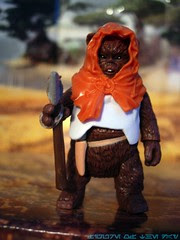 Bio: Kettch was created by Wes Janson during the hunt for Warlord Zsinj as a prank, much to Wedge Antilles's dismay. According to Wes, Kettch was an eager Ewok fitted with prosthetics which enabled him to fly an X-wing. (Stolen from Wookieepedia, and not at all descriptive of the character in the comics or the action figure.)

Commentary: One of the most delightful things about the Star Wars line is that it's so big and draws from so many sources that I'm always finding new sub-categories to get excited about. Around 2007 Hasbro got religion with Ewoks, cranking out 2 or more of the little buggers every year. Kettch is based on the furballs as seen in Marvel's Star Wars comic series, where a bunch of angry Ewoks grabbed surplus armor from the Battle of Endor and decided to go fight a group of little blue and pink aliens who were visiting. (This is why the hood is bright orange-- they're trying to capture the Marvel coloring.)

Based on the 1997 Romba sculpt, this figure adds a Clone Trooper armor piece and an axe. Cool, eh? The knife is removable from its sheath, he has ball-jointed ankles and shoulders, and the deco on the body of Kettch seems to be a better Romba than the real Romba. (The nose is better.) I love the idea of Ewoks picking up war scrap and wearing it, so I think this is a fantastic set you should all buy.

Collector's Notes: This comic 3-pack was Wal-Mart's exclusive and has not been reissued. I do not expect that it will be, so buy one if you stumble on one. It was easy to get where I shopped, but I did hear fan complaints that it was not available in their area. I also heard other fans claim it was a pegwarmer. So yeah, that's life in America.