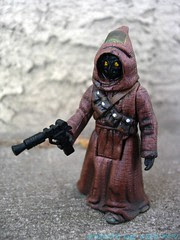 Bio: Jawas are scavengers who live on Tatooine, home of the heroic Rebel Luke Skywalker. Jawas ride through the desert in their huge sandcrawler vehicles searching for wayward droids and discarded scrap. They trade and sell their equipment and hardware throughout the colonies. Jawas capture R2-D2 and C-3PO when the droids land on Tatooine, and sell them to Luke's uncle. (Taken from the figure's packaging.)

Commentary: During the Original Trilogy Collection line most collectors got super-excited by the fact that Hasbro reissued all these great figures in really awesome packaging. (I think the OTC line packaging is better than the current Vintage line. It just looks better.) The earliest rereleases in that series were just straight reissues, but as time went on Hasbro applied new and better paint to some of its older molds. The Jawa set included two unique Jawa molds from 1996 in a set for five bucks, with new darker coloring and a black wipe applied to the mold. The light-up eye port was retained, and it tends to work really well on this mold.

The sculpt was awesome for 1997 and by today's standards isn't anything too special. For diorama filler or to pack your Sandcrawler, this may be one of the best figures you can get. The figure has three (possibly four, if you can get the head to budge) joints and is pretty much only good at standing. He can try to sit, but the angle at which the legs can move and the figure's pose will prevent it from being able to actually sit down inside something. So he'll just be standing, and the big uni-leg has no problem doing that.

The sculpted detail here is really remarkable, particularly for a figure that was (at the time of its release) about eight years old. The twin pack of Jawas seems to be long gone, so you're going to need to (or want to) track this one down. It's neat, it's well-designed, and it's a quality plaything. As a packaged item, this set is gorgeous. As loose figures, this is a wonderful set. You've got no excuse to not buy it unless one Jawa is enough for you and the 2009 ones were good enough.

Collector's Notes: This deco was only sold in the OTC 2-pack. Jawas sold with the OTC Sandcrawler had the original 1996 deco. The 2004 OTC set proved to be quite popular, but I saw it several times and also bought a few of them too. (I like Tusken Raiders and I also like Jawas.)

This set was super hard to come by when the OTC was in full swing. It seemed the repacks of the line sold better than many of the new figures. Yarua, Lobot and Cloud Car Pilot sat on the pegs well into 2005.