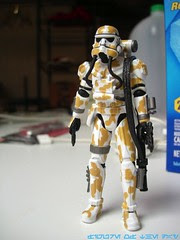 Commentary: If you're anything like me, you bought the original Imperial EVO Trooper in 2008 as part of the 30th Anniversary Collection, and then again when they repackaged it in The Legacy Collection. So why not buy him again? This time around the previously mostly-white figure has had a generous amount of brown camo added to the figure, while some of the knee and shoulder pads lost their grey coloring. I wouldn't rate it better or worse than the original release, but it certainly is different. It still has 14 points of articulation and some great gear, but the toy itself is sort of a lateral move in terms of its appearance. I personally prefer the first carded release, but I don't mind getting new and weird troopers. A black redeco would be nice, but hey, this is better than just more of the same, right?

Collector's Notes: As of now it seems this set has been purged from Toys "R" Us at retail, although it wouldn't stun me if you saw some stragglers. For about $30 it's a wonderful set and is well worth your buying it.