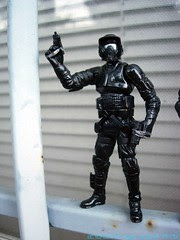 Bio: General Weir launches a counter-rebellion after the Battle of Endor to undermine the Rebel Alliance. The Imperial general discovers that Luke Skywalker is in the city of Coronet and, with his stormtroopers and storm commandos, goes after the Rebel hero. (Taken from the figure's packaging.)

Commentary: Part of another Wal-Mart exclusive series of comic packs, the Storm Commando was one of at least four black repaints of a Scout Trooper mold. This one was a straight redeco with no new heads or parts-- the white figure is now black, he has two blaster pistols (see the rubber bands), and a working holster on his ankle. The figure has some dark matte black paint on his person, with a silver visor on his helmet. While Hasbro probably could have left him molded in black, they didn't and the resulting product is all the better for it.

Collector's Notes: This is probably the least interesting of the black Scout Trooper repaints. One was sold with a black Speeder Bike as a Comic-Con exclusive. General Weir had a removable helmet and red bandoliers. A 2009 figure had a new head sculpt and new greaves on his legs, which is arguably the best of them. This one is still pretty cool, though, and a worthy addition to your armies of black repaints. (Everyone out there has a shelf of just black repaints by now, right?)