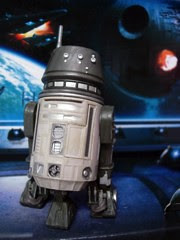 Image: The backdrop from the packaging.

Commentary: As much as I love my astromech droids, I'm often surprised by what Hasbro elects to give us. While I do have some esoteric robots on my wish list, I can assure you that R5-P9 was not one of them. I didn't even know the name of his pilot companion, Ekelarc Yong, until I got the figure in my hands. I appreciate Hasbro's production of obscure designs to make things interesting for people like me, but seriously, who the Hell is this guy?

A repaint of the 2006 R5-D4 figure (which itself was a remold of the 2004 Vintage R2-D2), the figure has a removable third leg, a removable antenna, and a pop-up "bad motivator." The panel on the left-hand side of the droid is glued down, but the deco is really nice. There's a bit of grime on his body, a little grey and silver paint, and some nice big silver eyes. He's a cutie. I wouldn't define him as an essential purchase unless you're a droid fan... and I am, so I really do love having this guy around.

Collector's Notes: This set is in stores now, and is still really easy to find. If you don't get one, well, don't blame me.