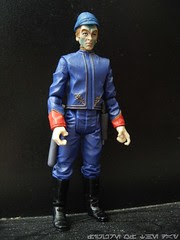 Bio: The elite Wing Guard is in charge of security on Cloud City, working as police officers, customs officials, and crisis controllers. Troopers such as Utris M'Toc and Sergeant Edian handle these crucial duties with honesty and efficiency. (Taken from the figure's packaging.)

Commentary: One of Hasbro's greatest ideas was to design a figure to get multiple uses out of a body-- so we saw multiple Imperial Officers, Rebel Troopers, and others in a short period of time because Hasbro thought ahead. In 2009 they had big plans to do this even more, but some of the figures didn't quite make it out-- this Cloud City Wing Guard barely made the cut as Hasbro decided to make the final wave of The Legacy Collection a shared exclusive in the specialty wing of its business, which means it went to Toys "R" Us and primarily online accounts in the USA. The figure uses the same body as the previous release, but with a new head and hat. The figure itself seems to be inspired by a piece of on-set photography as the actual character is rather tough to find (if not impossible) in the movie.

The figure is pretty good as it is built on a great sculpt, although the head deco is a little weird. The action figure has a lot of green in it, while the alien makeup shows very little color outside the bridge of the nose. Why did Hasbro add the extra detail? I have no idea, but it's there. The end result is a neat toy, and another addition to your Deleted Scene toy hall of fame.

Collector's Notes: This figure was rereleased in late 2010 as part of Target's Vintage Collection action figure 9-pack. As such, it's worth about $5 out of the package these days.

I still think that Guard body is an overly tall and far too wrinkled compared to the movie uniforms. It has good articulation, though.