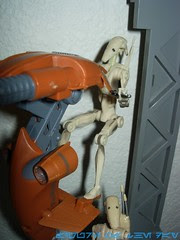 Bio: Your "interplanetary" adventures are about to go seriously mobile! Your STAP vehicle is constructed to look just like the vehicle in the epic Star Wars movie and is sized just right for your BATTLE DROID figure. Set your BATTLE DROID figure on the vehicle, then launch him into major Star Wars action! When the battle calls for super firepower, grip the stand and press upward to launch the vehicle’s missiles! (Taken from the figure's web site.)

Commentary: Is it different? Just barely. This Battle Droid is the third redeco of the STAP with Battle Droid first sold in 1998, and each time they change it just a bit. The STAP itself has been reissued with other figures and in Battle Packs numerous times, but as a stand-alone thing with this particular droid mold, it's the third go-round. This time, the STAP has a much richer color-- and honestly, this is the reason to pick it up-- while the figure is very similar to the previous releases, specifically the Sneak Preview one. With about 9 points of articulation, this thing was quite impressive when Kenner first put it out-- but today? Not so much. The sculpt is the very first Battle Droid we ever got, and it's been eclipsed-- but as a driver, it's pretty good. The figure is sculpted to grip the controls, with its feet on pegs to help him steer this flying gun platform. A button in the clear display base moves him slightly, and activates the rockets. But the real question is, how is he different?

The damage is a little different. That's basically it. Unless you have it side-by-side with the 1998 droid, you'll probably assume it's identical. The black grime is a little different, although much of it is in the same position. If you're a vehicle collector, it's worth getting. If you need every last Galactic Battle Game card, pick it up. But the droid itself is not significantly different than the earlier releases, so you could skip it if you're trying to cut back. I think it's the best movie STAP to date, so I'd still suggest giving it a look if you missed the previous releases.