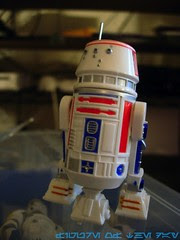 Bio:  R5-D4, also known as Red, was one of the last droids produced in the low cost Industrial Automaton R5 line, a line plagued with malfunctions. As a result, R5-D4 was owned by many beings and in a constant state of used sale. His programming became jealous of other droids that were capable of serving without failure and had loyal masters.   (Stolen from Wookieepedia.)

Commentary:  You don't need multiple remote control droids, but R5-D4 is as good as any.  The sculpt is very similar to the astromechs produced before 2004, specifically around 2002-2003.  The wires on the feet are pretty wonky, and the figure rolls ahead and beeps.  It's cute, it goes forward and backward, and that's it. The sculpt isn't as good as the 2011 or 2006 release, but you really just want to get it to drive around on the table anyway.  There are moving parts, but nothing is jointed in any meaningful way.  It's slightly larger than a normal astromech, but that's OK-- you're getting it for the play feature and not authenticity.

Collector's Notes: This wave of RC droids came and went pretty quick, and now goes for $15 or so per robot.    Oddly, R5-X2 goes for as little as $5, and that droid only exists as an RC figure so far.  I'd suggest starting with it, and if you like it, get the rest.  After all, you need an R5-X2!  R5-D4's overall best figure is the 2006 Saga Collection version, but the 2011 Vintage one with build-a-droid parts is pretty nice too.