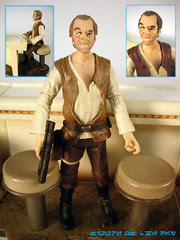 Commentary: I put up a poll on this very site to see which of the many new Vintage figures you wanted to see first, and you told me it was Dr. Evazan. Which, as it turns out, shows you have excellent taste. (I was hoping you would have voted for Kithaba.) He turned out really well, and is a fine example of Hasbro saying "Here, it's perfect, now shut up."

In the 3 3/4-inch format, there's a finite amount of detail you can sculpt into a head, and Hasbro has seemingly nailed it. With the original character being covered in makeup and shadows, it's no wonder they got it a little off way back in 1997 when the last head was sculpted. This figure makes him a little rounder, takes his grizzled-factor up a notch, and gets the outfit more or less right. Both hands are posed with trigger fingers extended to fire the gun, and the gun fits into the holster. Oh, and Hasbro used soft enough plastic so he can sit, and the holster was designed so as to not intrude upon the figure's ability to bend his legs... so in short, in many respects, Dr. Evazan is a better toy than most Han Solo figures.

Dr. Evazan has 14 points of articulation, and is basically on par with Hasbro's better efforts. There are no bend-and-swivel wrists, but these seem reserved for Jedi and clones these days. The outfit sculpting is really great, to the point where it's starting to make sense why Hasbro expects these figures are "worth" ten bucks. Other than the painted chest fuzz, which could probably be better, everything is great-- the shirt looks old, the vest texture is great, the pants are nice and dark, and the wrinkles are spot-on. Of course, the head is also quite good with the older hair and the dead eye, complete with scarring and that horribly disfigured nose. His mouth is barely open, exposing a couple of teeth, and this is where it gets really amazing. Hasbro painted the teeth! It's a teeny-tiny detail and you probably won't even notice, but I am impressed.

The only reason to hold on to your 1997 or 2004 Dr. Evazan figures is if you're hung up on that classic style. (I am.) Everybody else: this is perfect, an improvement in every possible way. And yes, you're being charged for it, but the face sculpt alone is something you would probably willingly shell out ten bucks for just to upgrade your existing old figure. Heck, even though Hasbro insists on stamping dates into figure legs (I HATE THIS!) the factory had the courtesy to put it on the back of the thigh, so it's difficult to see. Other than a little paint slop on the front and the back of the belt around the "metal" bits, I can't imagine Hasbro ever doing a better Dr. Evazan than this one. Get it. Get two, if you dare, the packaging is really nice.

Collector's Notes: An essential upgrade, this figure makes up for a Cantina figure which, well, it just wasn't all that great the last two times. I think I can safely say if you like the Cantina, you won't be sorry paying $10 for this new figure which, at press time, has not shown up at brick-and-mortar. You can order it online at the link below (and it's in stock when I'm writing this as part of a case), and as always it makes me look like I'm doing my job well if you do.

what chest hair? Can't see any in the photo. That's the only thing I see lacking