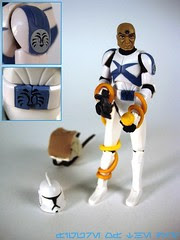 Bio: Ahsoka battles brain worms that infect her comrades, including clone trooper Scythe. The Geonosian worms turn their victims into menacing zombies, as Ahsoka finds out during a flight to a medical station. The Padawan must find a way to destroy the parasite and save her friends. (Taken from the figure's packaging.)

Commentary: Just like the orange trooper from these sets was mostly the 2008 body, Clone Trooper Scythe builds on that classic buck and gives us the ball-jointed ankles and bend-and-swivel wrists we love so much. As a bonus, he has a removable helmet and an exceptional amount of cool deco. While many troopers like Mixer had a little blue on him, Scythe adds to it with swell tampos on his belt and left shoulder. As an added bonus, his bald head has a swell tattoo on it, making this one of the more interesting figures in terms of clone decoration. (The orange figure from the other pack was notable for a modified helmet mold, so they're each good for different reasons.)

As an added bonus, the figure has two Geonosian worms on him-- one still attached to an egg, and the other gripping his entire right side. It's a great bonus, and this set will go well with Barriss Offee from The Clone Wars if you got her. (Go get her.) Hopefully they'll make more clones from these episodes, especially if Hasbro is going to go the extra mile to add to his belt buckle like that.