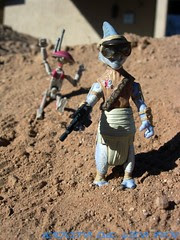 Image: Adam Pawlus' yard while under construction. Yes, that is a pile of dirt.

Commentary: The 12-year gap between the original Episode I line and the 2012 3D line was such a friggin' blessing. Even though he was developed around 2009, figures like Ratts Tyerell benefitted from a few years of improvements in Hasbro's sculpting and engineering, which is pretty fantastic. Sure, the 1999 Pod Racer figures like Gasgano were good... but this? This is way better.

The tiny Ratts has a huge body and tiny little legs. He looks like he's wearing a diaper, which is either charming or a funny allusion to the rumor/fact/rumor that NASCAR people whiz themselves in the races. If it's not true, I don't want you to tell me. He has jointed hips, shoulders, wrists, waist, and neck which is decent for a little guy. The paint is good, and the grin is spot-on. I love the removable goggles, not just because it's a nice touch but because it fits really well. He also has a gun. I don't know why.

The only thing I feel is missing from the package is a flag, as Hasbro went nutty including flags with almost every other new or reissued Pod Racer. Mawhonic has one. Toys R Us and Walmart both got exclusive sets with flags. Why no flag for Ratts? All or nothing, people. Of course, the flag is just me being annoying about wanting a uniform set of flags to go with the racers-- I wouldn't miss it if other figures didn't have one, and they're not exactly necessary. Much better is a Pit Droid, which was included and has a nifty paint job. For ten bucks it is more expensive than these guys used to be, but hey, two figures? Two accessories? Good paint job? I'm OK with this.

Collector's Notes: Originally meant as a companion figure to Clegg Holdfast, the delayed figure bowed in 2012 as a 2-pack with a Pit Droid. You may still be able to get him easily at a store near you, as he is newish.