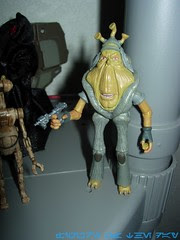 Commentary:  After losing the Fan's Choice polls a few times, Hasbro finally gave a figure to Ben Quadinaros after, oh, about 13 years of waiting.  As one of the few Pod Race aliens to get some decent screen time and an on-screen namecheck, fans of all walks of life actually knew who he was.  But for some reason or another, the idea of a kite-shaped biped with suction cups for hair whose torso is 95% face kept getting kicked down the road.  For such a goofy character, this super-articulated Pod Racer came off as looking far more sinister than I would have expected-- the sharp teeth, furrowed brow, and wrinkles turned this guy from a weird little alien into something that's just a little creepy.  Well, "creepy" mixed with what seems to be the aesthetic from The Real Ghostbusters ghosts.  The 3D model from the movie is lighter-skinned, doesn't seem to have his wrinkles quite as clearly defined, and his hair seems a little more managed.  This figure looks like the grim-and-gritty variation on the flustered racer, when what I was expecting was something a little more subdued.

While this wasn't a character I was campaigning for, it was one I expected we'd get eventually... but I was expecting something a little less, well, wrinkly.  I like mean aliens, don't get me wrong, but this character never struck me as the type to have an angry brow and dagger-like shark teeth.   Much like how several Jar Jar Binks figures failed to capture his personality, this figure didn't really strike me as flummoxed or, for lack of a better word, impotent.  The engineering is great, I can tell a lot of work went into the sculpt, and he has no problems holding his gun-- but, and I realize this is an odd thing to say, I'm just not feeling his vibe.   Which is unfortunate because I'm going to go out on a limb we'll never see this figure reissued or revised again.

Collector's Notes: He seems to be selling just fine, so with that in mind it's probably to your advantage to buy him now and not wait for later.  If you collect Pod Race figures, obviously, get him-- otherwise?  I'd say you could probably skip it, but as he's another in a long line of fan-requested figures, even if it is just a few vocal fans that really wanted him, I'm glad to see he made it out.  Even if it did take an unreasonably long time.  I mean, this figure actually lost Fan's Choice more than once.