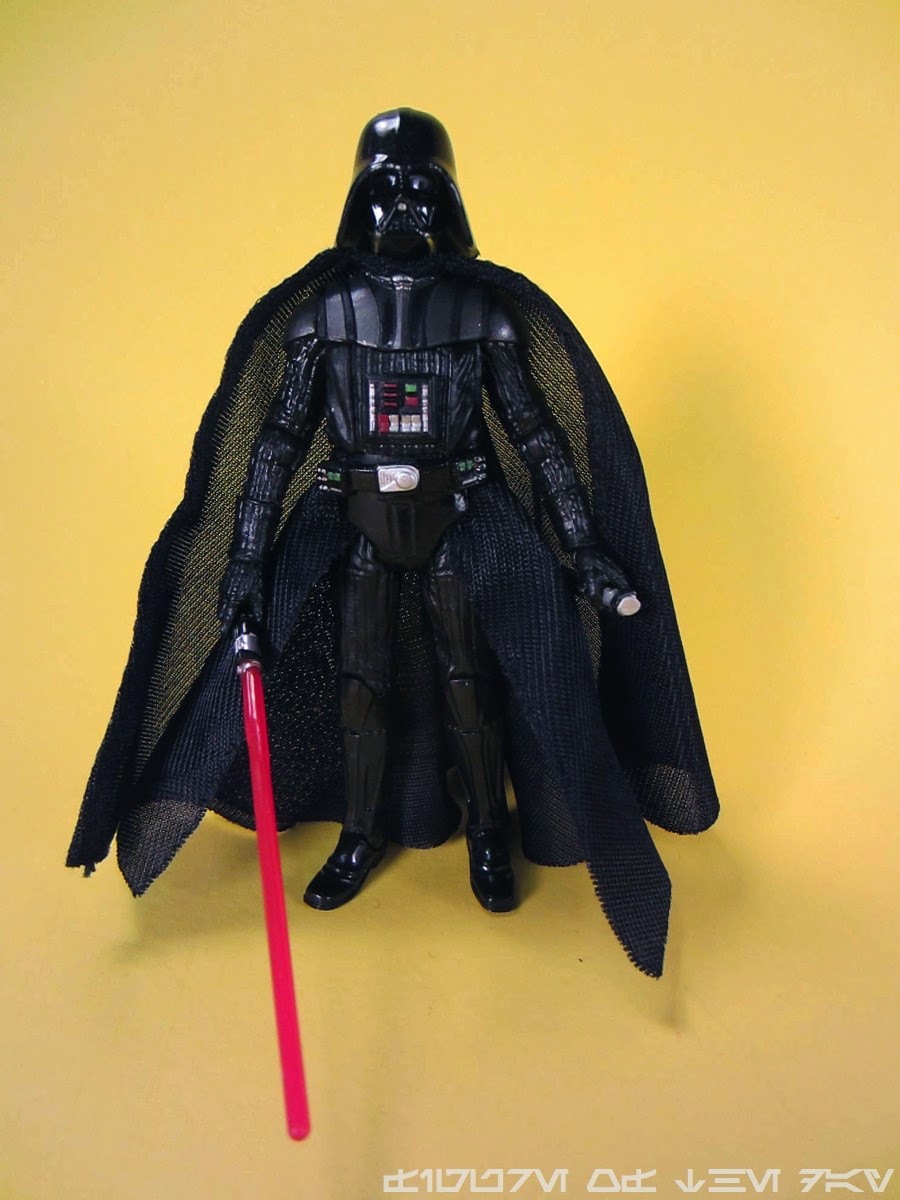 Bio: After undergoing life-saving cybernetic reconstruction, Darth Vader stands on the bridge of a Star Destroyer to watch the construction of a powerful new Battle Station.  (Taken from the figure's cardback.)

Commentary: I never went through life thinking I needed another Darth Vader, let alone one form Revenge of the Sith.  At first I thought this was a mix of new and old parts, but it turns out I was wrong - it's actually the ultra-articulated Darth Vader you've always wanted.  That's the good news.  The bad news is that it also trips up an unforgivable feature, which is that if you turn his head it always will fall off.  The assembly is terrible and once you have a figure that can lose its head easily, that's a bad figure.  I don't even mean "it can pop off," I mean "I dare you to turn it and not have it fall off."  The head holds the cape in place, and under the cape are two ugly divets that look like they were meant to hold the cape in place. 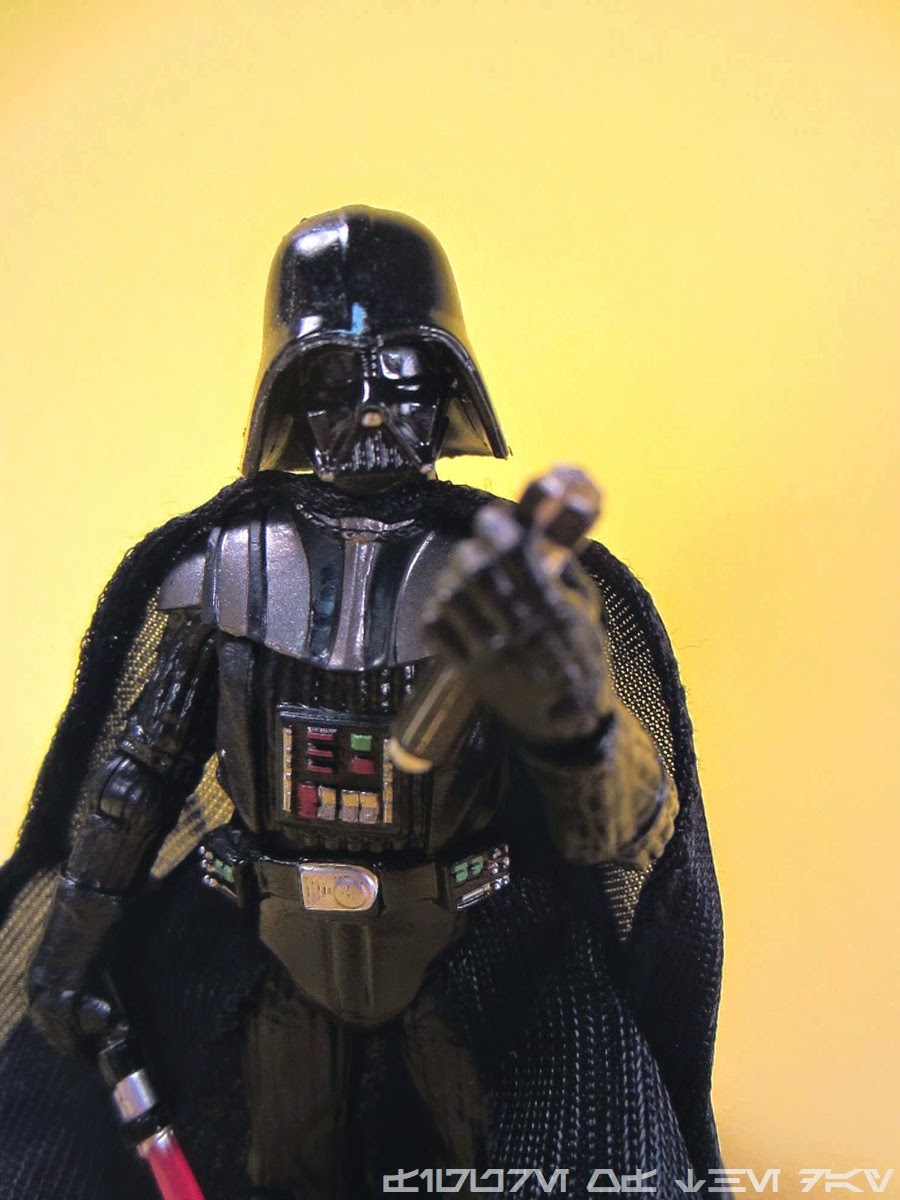 The sculpt is good, with rocker ankles, bend-and-swivel wrists, a ball-jointed torso joint that's amazingly well-hidden, and the ball-and-socket hips you all love. The knee joints are well hidden and if this came out with a good neck joint and a slightly better helmet sculpt, I doubt anyone would balk at buying yet another Darth Vader.  Hasbro did a spectacular, wonderful job on the articulation here but "the head falls off if you look at it funny" is an unforgivable sin.  The hands can grip the lightsabers, the textures are all quite nice, and he's appropriately skinny.  The sculpted chain on the neck armor integrates nicely with the cape, and visually it's a nice figure - possibly the nicest looking Darth Vader ever if you never open it. 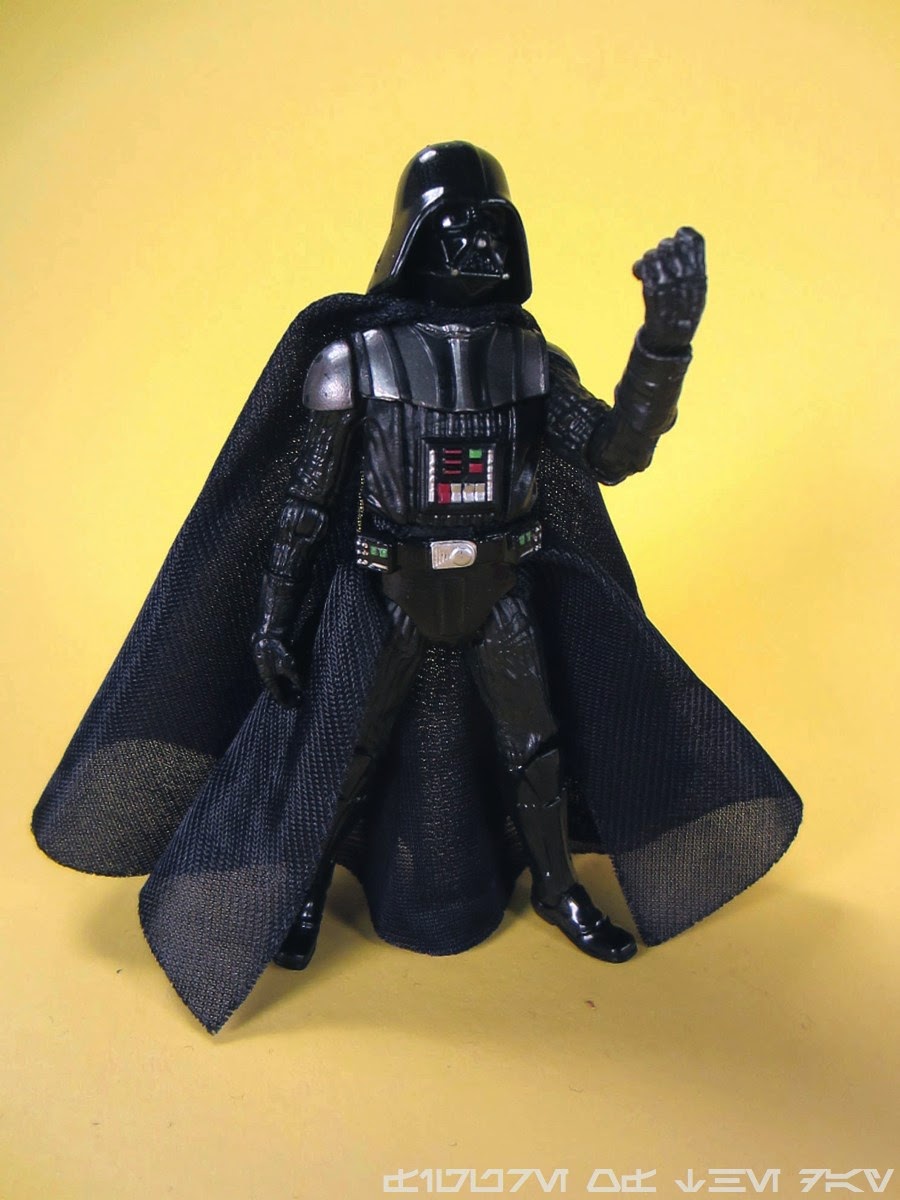 The inclusion of a newly-sculpted lightsaber hilt is baffling since it can't sit on the belt, and the belt is another part that irks me.  The codpiece has returned, meaning if you aren't careful it can stick up and he'll be quite happy to see you.

Some people will love this figure, and Hasbro should be commended at getting it about 95%.  But the problem is, that 5% is the wrong 5% to get wrong - no figure's head should fall off that easily, and we've had countless Darth Vaders since the introduction of ball-jointed necks that were all more or less OK.  Since the cape flies off when the head goes - and the head, without the cape, still won't stay put - I want to suggest Hasbro reissue this one with a retooled helmet/neck peg down the road.  And maybe a slightly larger, all-new helmet sculpt.  They should be proud of most of this... but man, that's the wrong part to get wrong.  In college I had teachers that auto-failed you if you did a report with someone's name spelled wrong, or if you left off certain citations.  That's how I feel about this figure - it's mostly well-done, but I can't get past the head foul-up and have to flunk it.

I think you are being bafflingly harsh in reviewing this figure. So its head falls off, are you planning on taking it to karate class? The attempt at innovation should be commended not shot down the first time it sticks it's head round the corner (pardon the pun). Given where we are with hasbro, I think this is an exceptional figure.

Great review Adam as always. As usual everyone is entitled to their own opinion. Thank you for informing us of this unfortunate expereince and I can honestly say that the most important part of any figure, as in real life, is the head. If the head falls off easily then there's going to a problem.

Hasbro makes toys. Toys should not have their heads fall off. As I said in the review, it's mostly great - good sculpt, good articulation, and lots of good design choices. I take issue with the fact a review that cites the positive things, says that the figure is about 95% good, and that the figure would probably be perfect were it not for one thing is "bafflingly harsh." I'd say that's closer to "bafflingly fair" for a toy whose head falls off. "Not falling apart" is tops on my list of what a toy needs to be able to do - and until this one, I didn't know it needed to be brought up, I just assumed it was a given.

Good review Adam. I can't deny that the figures head should not fall off so easily and would agree with your fail in spite of how amazing the sculpt and articulation are. However I have managed to completely remedy mine. No added materials or *gasp* glue. Just a simple meeting of head with hairdryer. Once I did that the head now "pops" on and does not come off unless that is the intention. Full range of motion and it is a beautiful thing. I recommend giving it a try -- I would say no more than 30 seconds in the heat (have been using this method for years with 99.9% success - the .1 you ask? That was a lightsaber and very much a mistake -- don't try on those)