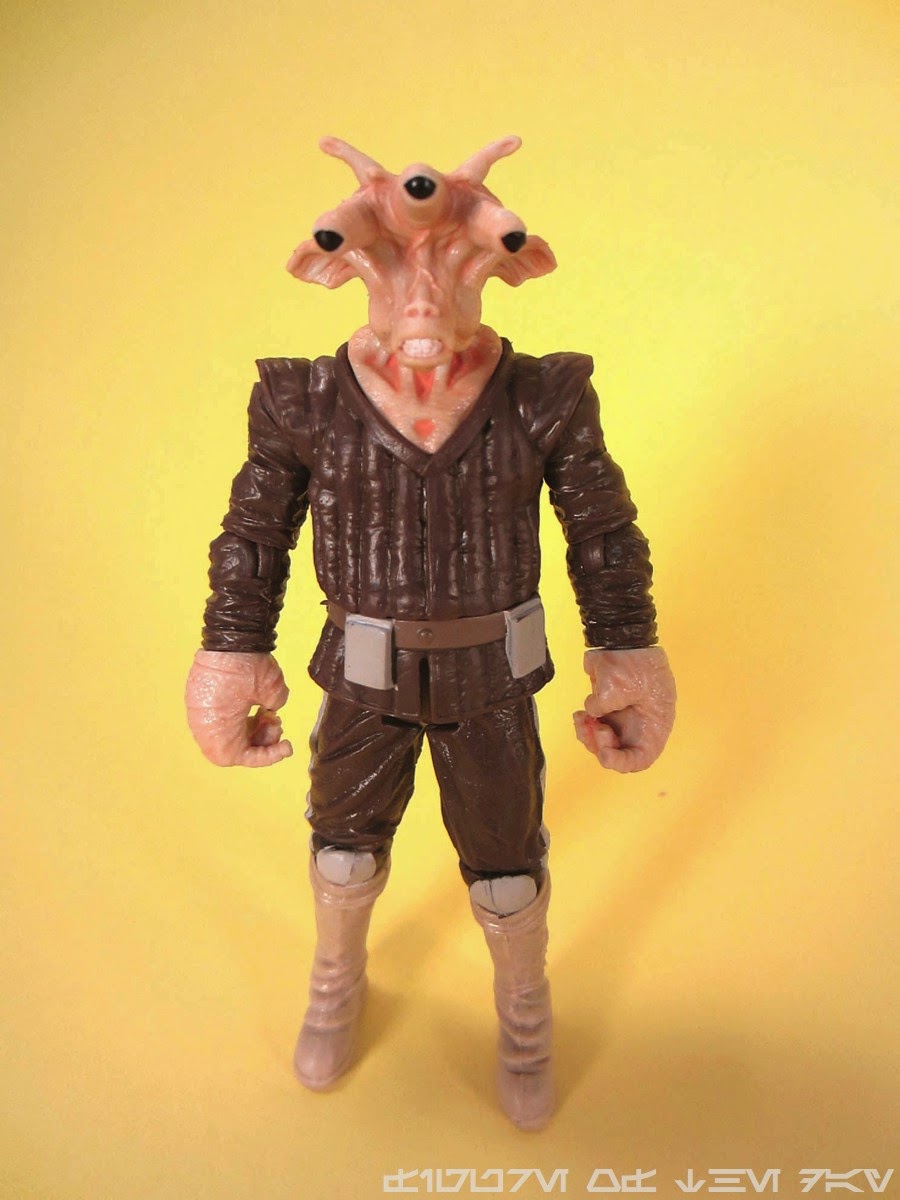 Bio: One of the lowlife criminals in Jabba the Hutt's palace on Tatooine, Ree-Yees is part of the excited crowd that eagerly watches Luke fight for his life in the rancor pit.  (Taken from the figure's cardback.)

Commentary: My Ree-Yees popped apart in seconds after opening him, but that seems to be intentional.  It also popped right back together, just as easily. You see, the figure has a ball-jointed torso - but if you swing his legs forward as if to make him sit, it acts like a lever and *pop* goes the waist.  The belt and lower coat go flying, so be careful - it can be easily popped together, and won't fall apart unless you try to make him sit.  Because many collectors either a) leave figures carded or b) open them, shelf them, and let them collect dust this may not be a problem for you. It may not be as much of a problem as Darth Vader's recent neck woes given that - I assume - most collectors won't expect their action figures to sit as much as they would be likely to want to reposition their heads.  I daresay the Ree-Yees figure is quite good if you can get past the fact that the torso can pop apart if he sits, and that the hands do come off easily.  Below, that's about as far as he can sit without popping apart. 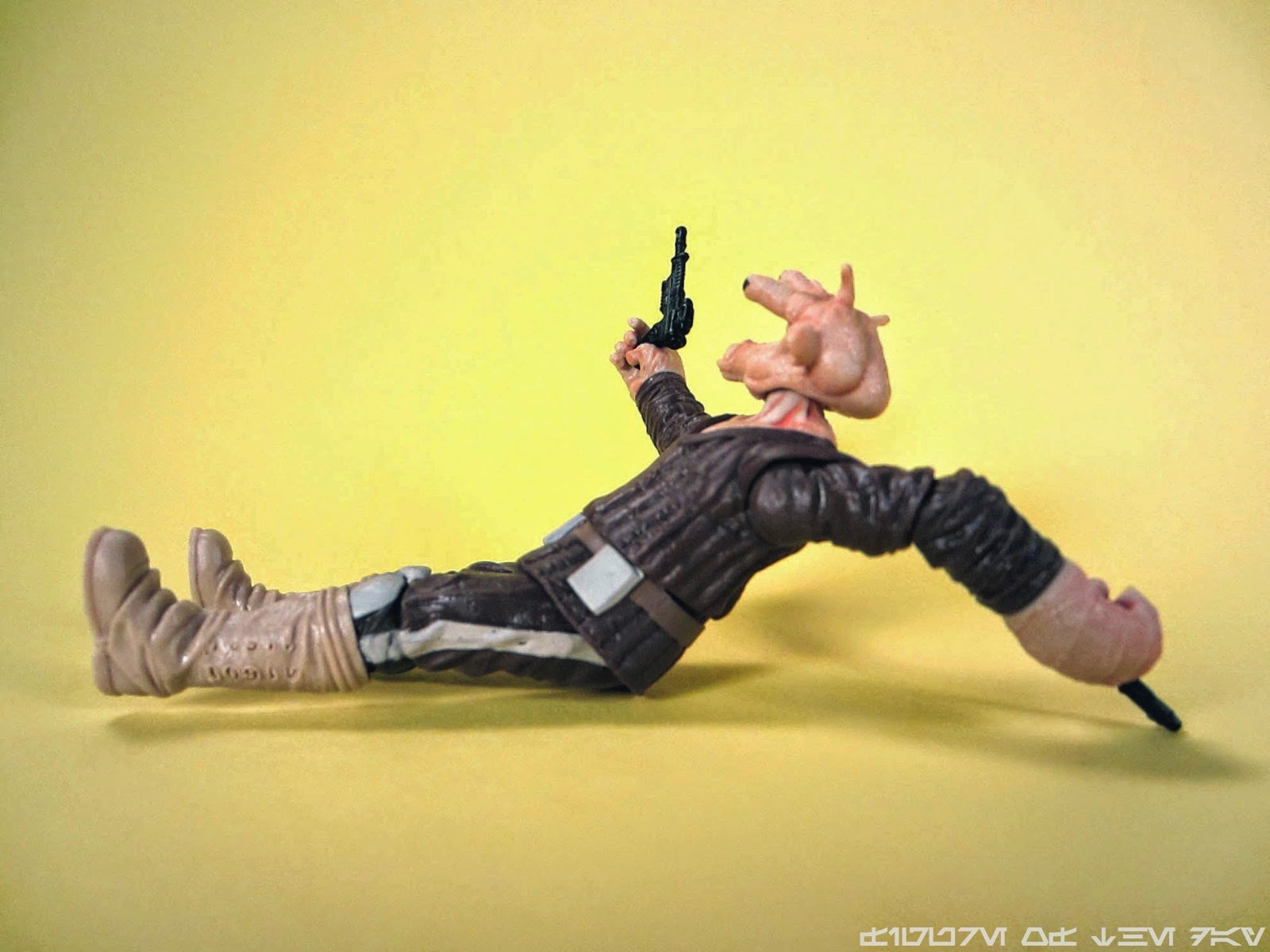 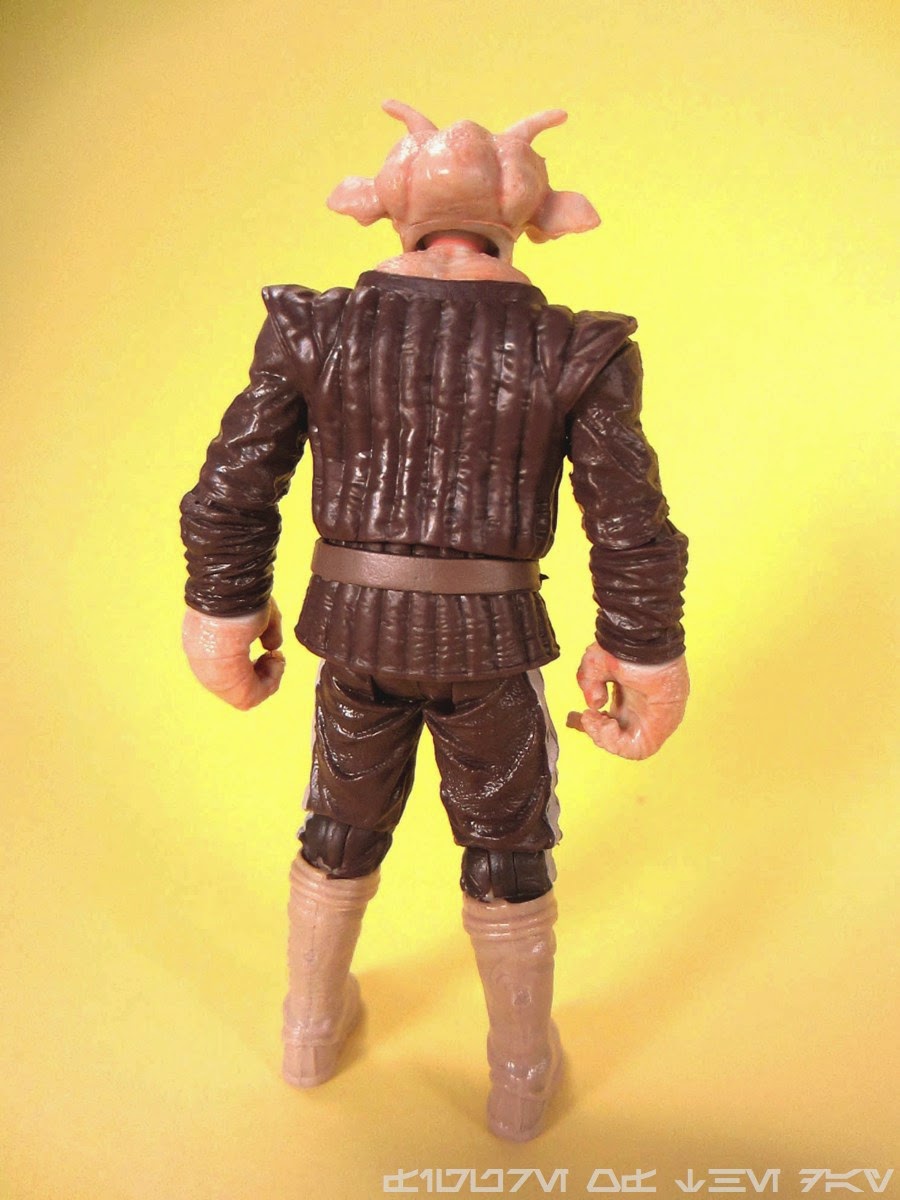 With 12 points of articulation, this is the second recent all-new sculpt after Yoda that confirms Hasbro is indeed reducing articulation on the collector line.  (Which to me raises the question, "why not just put them all into 'Saga Legends/Mission Series' and cut the price in half?")   The figure has no ankles, which is a mixed blessing - he certainly doesn't need them, but I know collectors demand them.   I don't feel ankles are necessary for this figure as he stands just fine without them.  Everything else is more or less normal, with swivel hips, ball-jointed shoulders and elbows, plus rotating wrists.  The sculpt of the outfit is a little more wrinkly than previous incarnations, and for this reason the figure feels almost unnecessary.  The 1983 original was good, and had a giant head.  The 1998 one was good, but had giant guns and a strange action-oriented pose.  This one has a slightly smaller head - I believe it's maybe 10% smaller than it should be - most shots from the film seem to make his ears about as wide as his shoulders.  The sculpted detail is good and the reddish wash over the grey plastic skin really does a nice job bringing out the detail, and doesn't look especially sloppy.  White teeth and black eyes complete the face which is aggressive, dumb, and generally what you want in a thug. 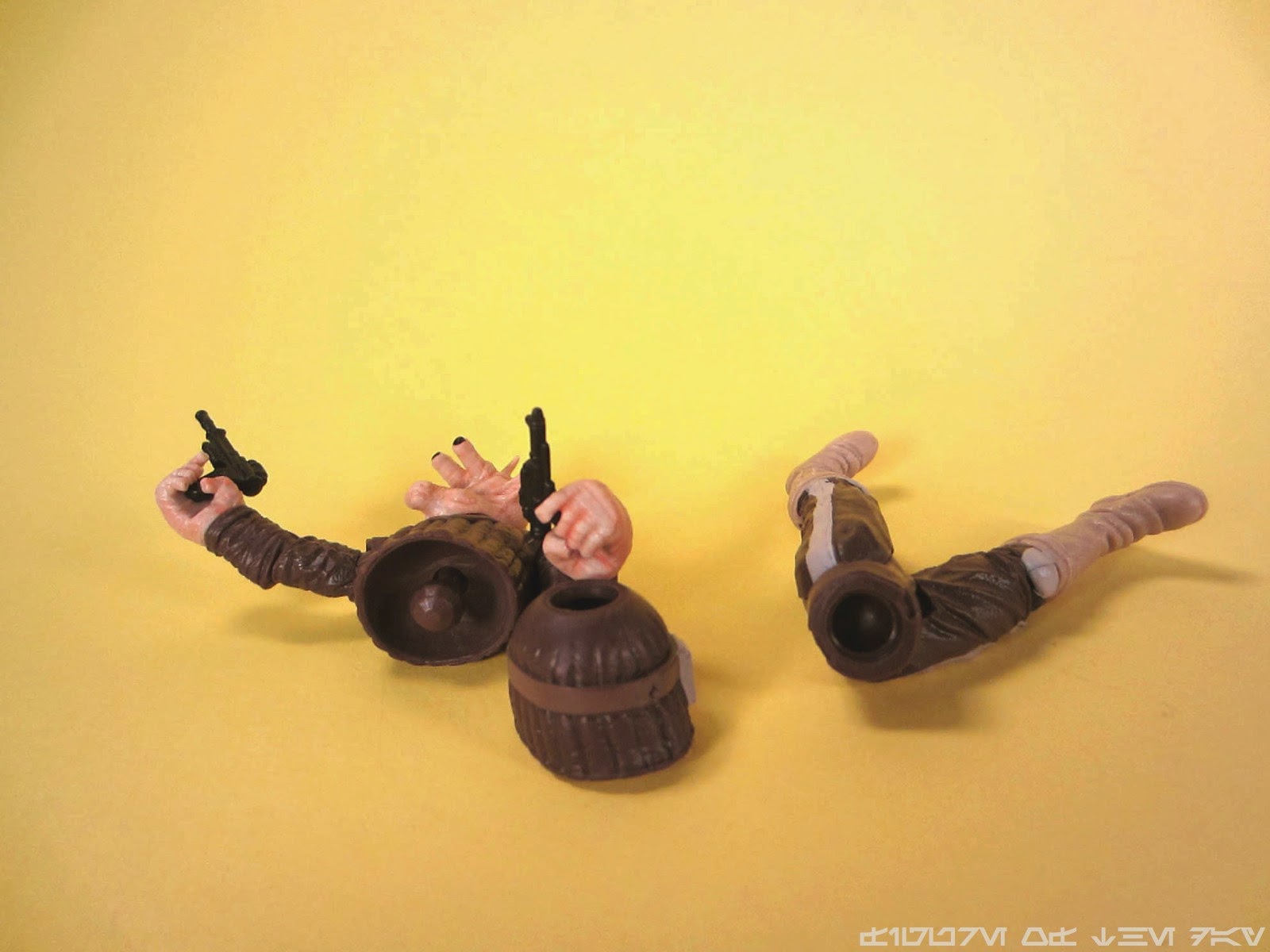 Accessories are smaller versions the same choices we saw on the 1998 Ree-Yees, sadly Hasbro elected not to use the giant rifle of the 1983 figure or the glass he carried in the movie.  He does not include the pike from the promo pictures.  The guns fit nicely into his meaty paws, each of which has a sculpted trigger finger.  They did a nice job here - it's not what I would have picked, but anyone can armchair quarterback this line and they frequently do.  The execution is what's important, and the accessory selection was engineered perfectly.  You can't ask for more than that. 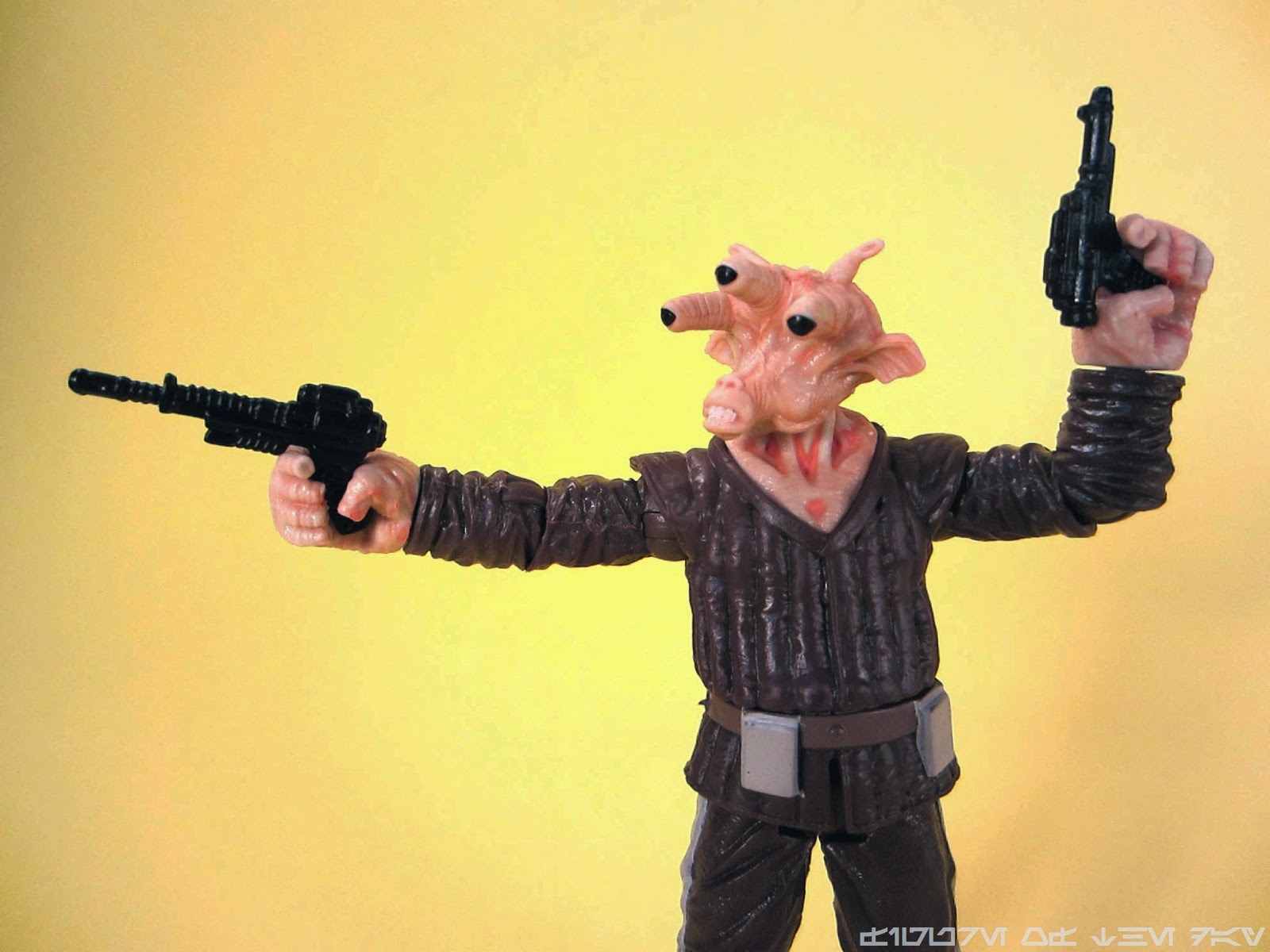 Ree-Yees hasn't been high on many request lists due to the previous ones being pretty good, but here's a new one, and it's pretty good.  The lack of ankles means he completely skipped that super-articulated era of the line and now we're sort of downsizing.   I submit to you - and Hasbro - if we're going to see a reduction in articulation while still being asked to pay $11, why not go all the way and make it a $6 single or $11 2-pack next time?  If we're going to see reduced articulation, I certainly wouldn't mind saving a few dollars.