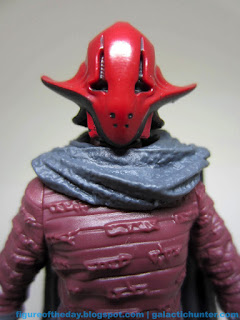 Bio: The era of frontier lawlessness that followed the Galactic Civil War led to the rise of the colorful pirate Sidon Ithano, the subject of many an exaggerated cantina tale. (Taken from the figure's packaging.) 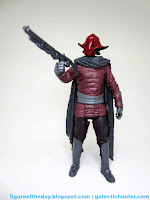 Commentary: It's the Crimson Corsair! Sidon Ithano managed to carve a deep groove in fan imaginations after making appearances in the toy line, the movie, and an eBook you'll never read.   He's a Delphidian, a new species we've never actually seen without a mask - the helmet is modeled after that of General Grievous, so what you have here is a good pastiche of Star Wars-y elements.  He has gloves, a red shirt, grey boots, and dark red pants - it looks like a rough pirate as space pirates go, not too shabby but not particularly well-assembled either.   As space pirates go, this is a thrift store space pirate.  He's got a cool helmet but everything else probably came off the shelf.   Kylo Ren isn't much better when you get right down to it, it would seem that the sequel trilogy is mostly populated by fanboys and cosplayers.   Whatever Postnik Yakovlev analog the Empire had on retainer to come up with the Darth Vader suit on a moment's notice apparently stopped working. 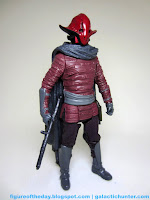 Thanks to the cape, Sidon isn't going to be doing much.  The head doesn't easily pop off and the cape is quite stiff - so even though this figure can sit pretty well, there's little chance he will go piloting any of your toy vehicles.  (It doesn't hurt that there aren't really any new vehicles for him to pilot.)   There's an awesome blaster in a holster on his hip, which is sadly decorative.   His helmet is glossy, and his clothes are somewhat tattered - the textures are quite nice.   "Quite nice" actually might be an understatement - since (my assumption, anyway) Hasbro moved to digital sculpts, we're seeing more and exaggerated textures on textiles.  You'll see all sorts of fabrics rendered in plastic, with the pants and cape being striking to say the least.   Mr. Ithano has no problems holding his blaster, and the arms rotate nicely.  This figure doesn't have a lot to do other than stand and look cool, which it does, but it's also sort of obnoxious.  On one hand, Hasbro took a stellar design and gave us a perfectly adequate action figure.  It's not bad, it's not great.   It does the job and it meets the minimum requirements of what I personally need a Star Wars action figure to do. 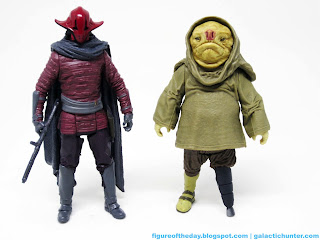 I have no doubt some of you are sitting there reading this hoping for a 6-inch version, or a super-articulated 3 3/4-inch version to pop up at Walmart.  I'm there with you.  I do have a place in my heart for the 5-jointed figures and as far as most characters go, that's possibly all I need.  If it stands and sits and fits in a ship, I'm a happy collector - and this one comes close.  I don't assume we'll see a lot of upgrades in the short term so I'm going to recommend you buy this set anyway - I mean, it's even less likely we'll see another Quiggold.   I look forward to more weird aliens and pirates because of how valuable they are at poking at our collective imaginations, but I do fear that our collective ability to obsess over an alien in a background of a bar scene has been robbed from us thanks to overmerchandising in the publishing program and the fact that everybody has a backstory right out of the gate.   We've been robbed of our sense of wonder via commercial reasons, and while it doesn't mean we can't enjoy a nice action figure - and this is a nice action figure - it's not like when the kids of 1979 got Walrus Man and had to invent his life story out of whatever was creeping around in their heads.