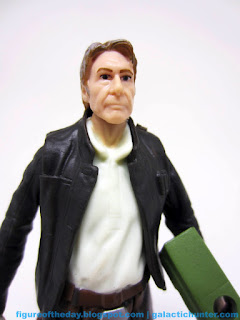 Bio: The exploits of Han Solo are legendary - he;s been a famed smuggler, captain of the Millennium Falcon, and a hero of the Rebel Alliance.  As the galaxy teeters twards war, Solo once again finds himself in the center of the action. (Taken from the figure's packaging.) 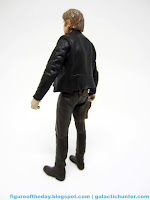 Commentary: He's finally here! Oddly not part of the launch line-up, Han Solo finally makes it out to stores after most fair-weather fans have already moved on to not caring about Star Wars until it becomes fashionable again in about six months.   Of course, for the loyal, this is a big-deal must-get figure.  Its quality matters not - it's Han.   And there's nothing cooler in Star Wars than Han Solo, or so we say, the reality is that a lot of his classic figures over the previous decade have sold somewhat slowly.   At this time, this Han costume is available in this 3 3/4-inch format and as a 6-inch The Black Series figure - there's no super-articulated 3 3/4-inch one yet.  (That we know of, or, really, at all.) 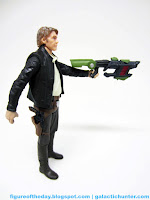 Little Han and Big Han  both seem to be sourced from the same digital sculpting - you'll notice many folds, bulges, and creases are in the same place.  The 3 3/4-inch one has seemingly been kicked down to a lower resolution, as the textures don't seem to be there and numerous elements are smoothed out.  At the smaller size, it's less obvious but a few paint applications like code cylinders and the patina of time has been left off his jacket and shoes.   Other than that, the two are very similar with one of the best Harrison Ford likenesses we've ever seen on a Hasbro action figure.   I have no doubt this is making people very antsy for the inevitable Luke Skywalker as Old Dude that we'll be seeing sooner or later.   He's got 5 points of articulation and does the whole standing and sitting thing quite nicely.   His right hand could be a little tighter, but it doesn't have much trouble holding the included blaster pistol with brown painted grip.   It's a nice figure. 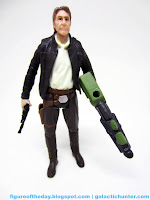 The bonus accessory is a fairly decent green and grey blaster which can plug into a backpack that comes with another figure I have yet to open.   It's no goofier than anything we saw Kenner create out of whole cloth in the late 1990s, and I'd say it's more Star Wars-y than some of the other stuff we've been sold since last year.  The silver button and red indicators on the side are a nice touch too - they're spending a little money on deco, but if we're being honest not a one of us would miss this if it were left out.   And I suspect it will be left out in the next one to two movies, with the cost staying pretty much the same, as that's typically what we saw happen in the 1990s to early 2000s.   Pricing is tumultuous, but the one thing that's consistent is that we will turn out to buy new figures.

If you're a fan of any strain, this is a must-buy figure.  If you hated the movie, you probably still love Han Solo and I have little doubt that you wouldn't buy this figure if you had a crack at him.   Get it if you can - the figure in and of itself isn't going to set the world on fire, but it's Han Solo!  I have no doubt that's part of why Disney bought this franchise, but hey, it's working ain't it?