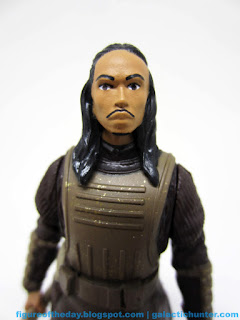 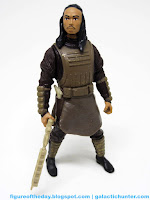 Commentary: He's short!  Tasu Leech is really tiny.   The figure is roughly a head shorter than most other figures, and the actor is 5 feet 2 inches.   That's more or less right, but he does seem unusually short especially when compared to Nien Nunb who's known for being short.  His likeness isn't terribly bad, getting his hair right in plastic seems to provide Hasbro a challenge and they did an acceptable job.  He's also got a mustache, which is pretty uncommon in Star Wars outside of Bespin.   The long hair makes it tougher to turn his head, but that's true of any figure with decent locks. 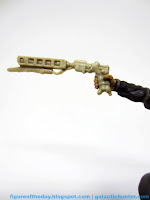 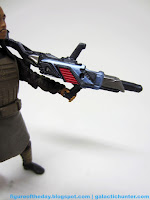 His costume is more or less spot-on, and Hasbro elected to bring back "skirt" pieces rather than cut them up like we saw in the 2013 Mission Series / Saga Legends figures from the prequels.  He can basically sit, but I'd rather see them go back to the old carved-up T-crotch look for the best mobility.  It's worth noting that his boots and chest armor have some splatter damage, but it's not like it stands out particularly well - if anything, the gold glittery effect comes off as distracting in some photographs.   The sculpting can't be beat for the scale, but I'd say the color may be a little light.  (It's generally common for toy companies to lighten colors as the size of the figure decreases.) 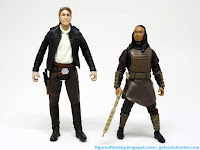 Overall, it's a nice figure but not one that's probably going to do much until later.  If Hasbro makes more of the gang, I assume we'll see this figure's popularity skyrocket.   Otherwise, it might just slowly get forgotten unless kids get into it.  The pose is a little weird for modern Hasbro, as the legs seem to be more action-oriented.  Not quite 1995 Power of the Force levels, but the figure does stand out as being a little different from his peers.  It wouldn't surprise me if another team worked on him, or if it was outsourced to other designers.   I would recommend this figure to you because new space gangster figures are far and few between, and I'm really hoping we'll hear more from his organization.  There's room for improvement on his facial hair and whatnot, which I assume we won't see unless we get a 6-inch version of Leech.  (Were I a betting man, I assume we wouldn't see that either.)   It's the best Tasu Leech action figure money can buy!   ...you don't have a lot of options.

I missed the Klingon. Guess I'll have to watch FU again.
Can we have some Gamorrean Guards without buying the Rancor again, please?