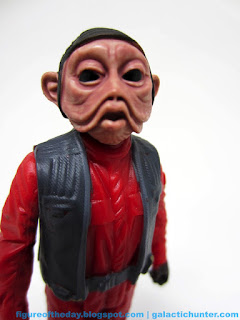 Bio: A Sullustian pilot who was vital in bringing his people into the Rebellion during the Galactic Civil War, Nien Nunb continues to loyally serve Princess Leia Organa as a member of the Resistance. (Taken from the figure's packaging.) 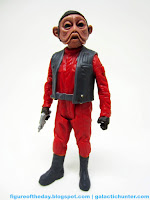 Commentary: He's back!  Nien Nunb is a favorite to many of us since we got ours as the first year of Return of the Jedi figures from 1983.  This one is about as tall as the Kenner original - which is to say, he's tall - with a new blaster and a  backpack with claws on it that I flat-out do not understand. 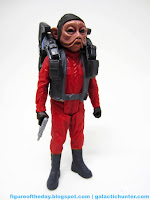 It seems that the Abrams camp borrowed heavily from the 1983 original, giving Nien Nunb the same high-waisted vest with a bluer tint and boots far more similar to that original Kenner toy.  He's also taller than the 2012 figure - I assume Hasbro's current team has lost some of the notes over the years as to things like scale, weapons, certain colors, and certain materials.  What we got is a perfectly charming 5-jointed update of the famous pilot, complete with a small silver gun that's very acceptable.  It's not exciting, but it's similar to other Resistance pilot guns and, of course, you could do worse. 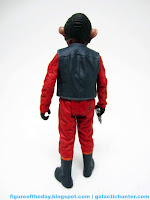 His face is a little freaky - the eyes aren't quite as big and glossy as I would like, and they photograph like two soulless black holes.  This isn't a knock at the sculpt, more of how the materials played out when I photographed the figure.   This still looks like the alien we all know and love, but with a hint of being a version of him that haunts Lando's nightmares, rattling chains and telling him to change his ways.   Mr. Nunb has decent articulation, and I assume a pilot gear outfit could be made if Hasbro were so inclined.  (I'm currently banking heavily that Disney is calling the shots for most of the characters here.)   The extra backpack accessory is a tight fit, and has multiple moving claws.  Why?  I have no idea.   The more of these I get the more angry I am that they were no doubt included as a way of trying to get buyers to rationalize a higher retail price.   A display stand or a secondary movie weapon would be pretty cool, these are just a drag. 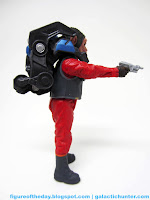 Since Nien Nunb was a favorite when I was a kid, I like this figure.   He hasn't gotten much play compared to the others, and to be honest I wish Hasbro kicked him down the road a bit just because his costume isn't really all that different when compared to Leia or Ackbar or C-3PO's red arm.  It takes resources to make a new figure, so seeing Nien Nunb right now just sort of feels shruggable.     There's nothing terrible about him other than the height issue, so much like that first Boss Nass I wish we could have just gotten him a year or two later.   But he's here now, and he's pretty good, I guess, but even if you're building the weapons it's a lackluster group - another Kylo Ren and another Stormtrooper?  If anything, this is probably the most desirable of the trio even though the Adam Driver head sculpt ain't half bad.