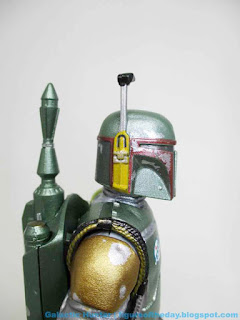 Bio:  With his customized Mandalorian armor, deadly weaponry, and silent demeanor, Boba Fett was one of the most feared bounty hunters in the galaxy.   (Taken from Hasbro's packaging.) 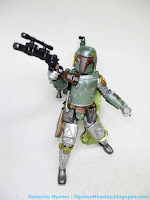 Commentary: I just got my Boba Fett (Carbonized Graphite) in the mail from work, and it's pretty great.   When I was made aware of this figure existing I kind of rolled my eyes a bit - I'm not exactly crazy for the idea of "the same thing, but shiny" because the earliest releases in the format ranged from amazing but rare like Mando, or pretty blah like the Second Sister Inquisitor.  I'm not so crazy about Darth Vader from the pictures, but Boba Fett seems to fall squarely in the same camp as Mando - it works, and it works well.

It helps that Boba Fett is colorful.  Metallic black isn't exactly exciting, but the yellow and green packaging holds a pretty stunning figure inside.  The shiny silver body suit really sizzles, the metallic green looks great, the yellows aren't bad, and the coppers... well, they're OK too.  I love how the red lights and buttons on his gauntlets pop, plus the cape looks and even feels a little bit like mylar.  Articulation is the same as it has been since 2013, and the figure has no problems holding his blasters, standing, or generally looking like the best thing you've bought in months.   The shiny blasters look great, the jetpack has never looked better, and if you only buy one 6-inch Boba Fett this might be the one to get. 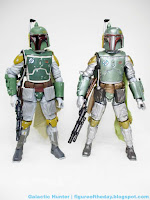 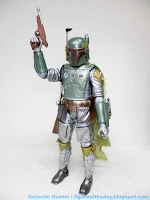 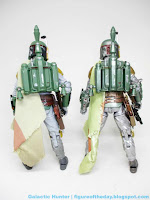 7 years and at least a half dozen reissues/repaints later, the mold is still holding up well with the joints on my sample remaining nice and tight.   Maybe it's the paint, maybe it's better equipment, but I will say you won't be disappointed if you pop this one out of the box. 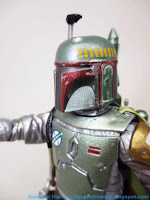 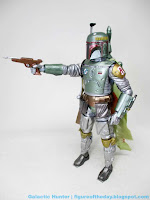 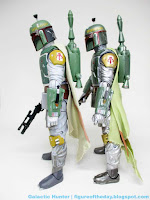 I'm not quite sure why the Carbonized figures vary so much in terms of quality - some will light up even in a dimly-lit room, while others barely look any different than a standard release.  This is one of the best ones, and I hope they keep trying to do some weirdness like this with a gleaming gold C-3PO or maybe even one of the orange Pilot Lukes in this format.   Star Wars is a fun toy line but is sorely lacking in bright color - it's a weird piece, but it's nice to see Hasbro found a way to make it bright without putting figures out in teal or purple or some unprecedented colors.