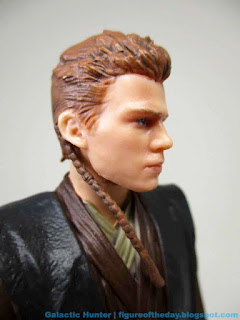 Bio: A hero of the Clone Wars, Anakin was caring and compassionate, but also had a fear of loss that would prove to be his downfall.  (Taken from the figure's packaging.) 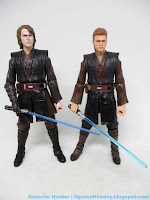 Commentary: While not perfect, Anakin Skywalker is pretty fantastic given a good chunk of him is just the Revenge of the Sith figure from a few years ago.  The lightsaber is a new sculpt and closely models the hilt that got destroyed in Attack of the Clones, which means it looks great.  Unfortunately Hasbro didn't design it to interact with Anakin's retooled  belt, featuring tons of different gizmos hanging off the sides when compared to the Episode III version.

The figure itself has a new head, the aforementioned belt piece, and a new lower right arm and hand - ungloved this time.  The elbow can bend a little more than the prequel-sequel version on the new arm, but its range of motion isn't as good as some other more recent figures.  He has no problems holding the lightsaber with one hand, but he can't hold it with two hands particularly well.   Standing is also a bit of an issue, more recent figures have slightly smoother movement to the joints but getting this one to stay upright takes a little bit of fidgeting... or a display stand. 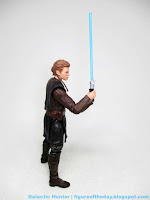 The most interesting part is the head.  If you compare the 2013 figures with today's, it's amazing to see just how far we've come.  Skintone and paint have been a problem for Hasbro for years, with some figures turning out perfectly well and some hilariously bad.  This is easily Hasbro's best Anakin - the skin isn't too pale, it has just a hint of a translucency to it, and the face printing is top notch.  The hair feels a little high, but it still looks like Anakin.  More specifically, it's eerily accurate to Hayden Christensen.  I kept taking pictures of it with slightly different lighting at different angles and it just looked so cool - it's a little weird being on the older body, but these new heads are consistently great.  You get the Jedi rat tail.   He's even got sand on his boots - it does get everywhere! 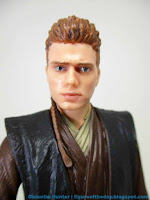 The prequels weren't everybody's cup of tea at the time, but that generation has grown up and as any fan knows, Star Wars improves when measured against newer entries in the saga.  Some stuff holds up well over time, and some stuff needs some time to gestate before it clicks with pop culture at large.  People used to hate Return of the Jedi!   Now they've got their pick of five new movies to disown from the last few years - while mostly, slowly, clamoring for more prequel toys.   I'm glad they waited to do a decent upgrade on Anakin, and this is worth your while.   Pre-orders are still open online, as are orders, depending on when you read this.