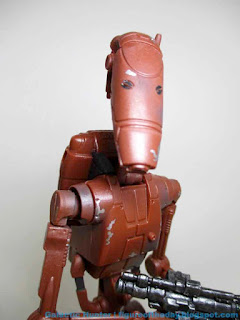 Bio: Rather than use flesh-and-blood warriors, the Separatists prefer tall, thin battle droids to serve as mindlessly loyal soldiers that are easily controlled.   (Taken from the figure's packaging.) 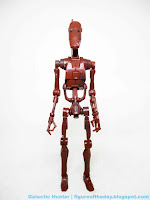 Commentary: Continuing this Star Wars wave of repaints and retools, Battle Droid (Geonosis) takes the tan droid and redecorates it.  Hasbro could've done a lot less here - if they just took the tan droid and made it red, it would've sold fine and you'd be happy with it.   Thankfully I don't work at Hasbro in the deco department.    The Geonosis edition has distinctive battle damage and wear when compared to the Naboo version, and also is distinctive from GameStop's Heavy Battle Droid version.  I appreciate this.

It's a great figure, skinny and well-jointed with a lot of detail.  I love that the blaster can plug in the backpack, and that the hands are perfectly designed to carry the weapon.  I also dig that it can stand and be posed nicely, or ball up into that cargo mode we saw in the first prequel.   About 24 useful points of articulation let this figure assume a bunch of handy poses, with arms and legs able to bend incredibly well.   Hasbro's humanoid articulation in The Black Series hasn't always been the best, but for these droids it seems perfect.  For a figure of this size at this price, it's above what I would expect. 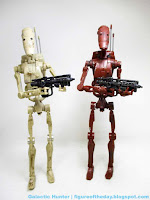 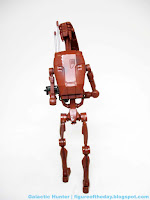 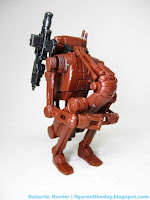 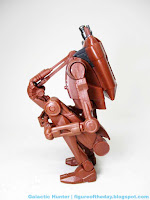 Finding the figure's center of gravity is tough, and I would assume it's going to fall over with time.  It would have been nice to have Hasbro give the figure some sort of stand that offers support above the waist, but they didn't.   It's a gorgeous figure with marvelous silver paint chips and excellent weathering on the blaster, though, so all I can say is that it's a pity that it came out during a time where it will be difficult to army-build and probably long after anyone sees it and goes "I want to spend thousands of dollars on prequel armies."  I think it's a great figure and I hope Hasbro reissues it on the regular so everybody can buy a few more.   Good job Hasbro!  I never thought it'd be 18 years out from Attack of the Clones and we're getting tip-top nostalgia collectible figures, but here we are.