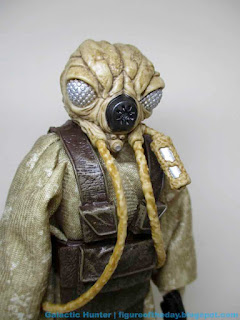 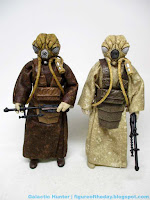 Commentary: I assume this 4-LOM in Kenner colors (and companion Zuckuss) were originally meant for Celebration or Comic-Con, but who knows?  As a shared 2-pack, making two popular bounty hunters in the colors most older adult fans will remember is an easy, smart move.  This figure (as Zuckuss) was previously a shared item strewn to the retail wind in the wake of Toys R Us' demise - so maybe you got it, and maybe you didn't.  If you didn't, this is a perfectly good replacement.  In the movies he was a little darker, but the still photos look much more like this lighter, tan figure.  And that's fine - this is the one I tried to chase down as a kid in the 1980s.

As with before, the figure has big cloth robes that hinder a lot of articulation.  His rifle is back, held in his left hand.  Articulation seems a smidgen better, perhaps due to thinner soft goods, for this release - but you'll note the robe is still nicely weathered.  Our fine Findsman friend has some marvelous sculpting on his head, and you can get a better idea of just how much work went into every wrinkle and crease thanks to the lighter color with the tiny bit of paint to highlight each part of the craggy cranium.   What's more, the silver eyes and tubes pop right out - even in a darker room. 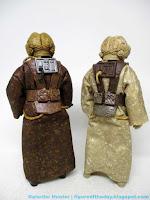 The names of bounty hunters were largely unclear.  Boba Fett, IG-88, and Bossk were well known, but Dengar was "Zuckass" in some publications.  Kenner swapped 4-LOM and Zuckuss - and a lot of us had no idea until West End Games or various video games showed them with the corrected monnikers.

This is not the first version of a "Kennery" Zuckuss - we got 4-LOM in another 2-pack for Star Wars Celebration a few years ago as a 3 3/4-inch release.  I like this one best, mostly because it meshes my memory of the original toy with how the alien looks in my mind.  Is it accurate?  Does it matter?  He looks awesome and fits in well with everybody else, plus gives Hasbro another easy redeco exclusive that Amazon and Pulse quickly blew through.  Good choice, all around.  Get one if you can.