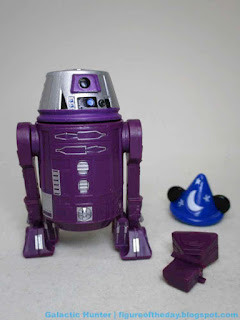 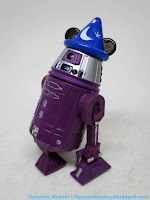 Commentary:  The purple R5-Series Astromech Droid was sitting here unopened in his plastic case since 2015.  So 5 years - and it was time to open this one up!  Part of a parts bin that may or may not even still be at the Disney parks.   The silver dome with purple highlights came out after a white dome with purple highlights, making this series a nightmare for completists.  Knowing what exists - and how to find it - will prove a challenge for fans for years to come.

Based on the same basic build-a-droid chassis we started getting back in 2008, this purple droid more or less matches nicely.  The dome has some purple paint that matches the purple body, but a few elements are considerably darker.  It stands out, and at first glance it almost looks like an error.   Most of the elements are painted nicely, but there are a few parts that seem underdecorated on the dome - at least the body has some great silver outlining. 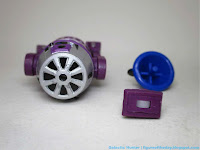 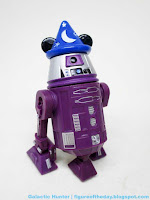 The droid body has articulated feet and a removable third leg, but none of them have the wiring we got in the first batches or from Hasbro.   It still looks cool, plus it has a hole in his head for hats or hooks on the Droid Factory playset or Sandcrawler from Disney.  It's a nice toy figure with rolling wheels, but if you've got one of these, you've got them all - at this point getting more is just for completism's sake.  And that's fine - I mean, here we are, still talking about these barely-different droids.  If you can get one for the $13 or so price it's neat enough, but after shipping and any theoretical admission prices, maybe just stick with whatever is cheap and easy to track down.