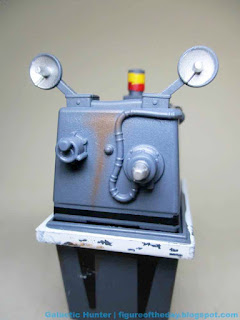 Bio: Little more than walking batteries, power droids trundle along as directed by their owners or their programming, recharging vehicles and machinery.   (Taken from Hasbro marketing materials.) 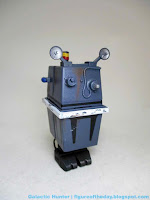 Commentary: For years there has been question as to what the original Kenner Power Droid was.   This is Hasbro's first attempt to do it on the 1979-style cardback... and it's clearly not the same robot.  The one in the picture has a different face and some different greeblies on the side of the head, but this absolutely is the Lars Family Homestead Gonk Droid we see tooling around Beru when Luke makes his first appearance in the original film.   This is absolutely a new on-screen droid and that's a huge blessing.  But it it in any way a replacement for the original Kenner figure?  Not a bit.   It's still essential and you will want it.

When you see it walking around in the movie - easily found on Disney+ streaming version - you can see where the original Kenner robot's colors probably came from.  (Certainly not from the photo used on the cardback.)   The grey can be easily mistaken as blue, and the white stripe around the belt area made the cut.   Everything else seems pretty fanciful creation from Kenner's imagination - and it was a good one, too.   It would be nice if Hasbro made a new Power Droid as a tribute to the Kenner original, but until then, this is another droid you can add to your collection.  The 1999 The Power of the Force CommTech edition is probably the closest you'll get to the original cardback from Hasbro, but they could redecorate their tan one and give us a better taken on both it and the Kenner one. 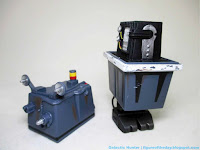 That aside - what matters is what this figure does deliver.  It's exceptionally rare that we get a new droid from the original trilogy unless it's the result of a handsome, smart toy buyer from some online toy seller.   It's even rarer that we get one that has managed to keep out of the prop books and didn't stand out to fans as actually having been in the movie, despite taking place during a prominent scene introducing the entire saga's most important character not named Darth Vader.   The figure has the same lower body as the previous Hasbro releases since 2012, and that's pretty great.  There are some painted symbols and what appear to be grease stains all over, plus lots of faux weathering and paint chipping.  The only deco thing I don't like is their decision to put the date stamp and SKU in silver in plain sight on the figure's lower back.  Why not under the removable dome? Or on the foot?  Or generally out of sight?   But I digress. 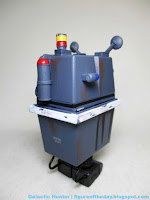 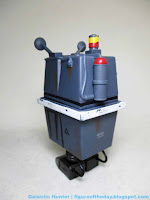 The new "head" is amazing with tons of radar dishes, wires, doodads, and thingamabobs.  It's right out of the junk heap aesthetic during that early era of Star Wars where science fiction was transitioning from Flash Gordon-style rockets to a grimier, used look.  It's all here - this figure looks like a bunch of junk got slapped on a couple of Rubbermaid bins, and the result is perfection.  The figure also has bend-and-swivel hips and bend-and-swivel ankles - neither of which are necessary, but for $13 that's the very least we should get.  It would have been nice if Hasbro included an alternate "head" or other accessory to up the value of this one, but given that it's a supposed update of one more of the original 21 it's something I think you're going to buy with a smile.  On the card, it's a fine collectible.  Off the card, it's a necessary addition to your dioramas.

Figures like this are the reason I still collect this figure line in 2020.  It's from my favorite movies, it's new, and it showed me something in the movies I didn't really notice until now.  It's kind of expensive, and yes it's just an existing figure with a new hat - but that's all it needed to be in order to be perfect.  I hope you can get one.   And I'm glad Hasbro gave us a brand-new, we-don't-have-this action figure from the original trilogy.  It's been a long time - and we'd love to see some more like it.