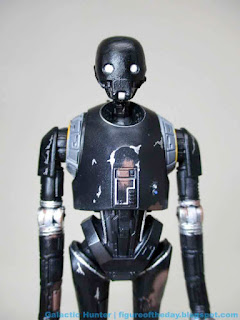 Bio: A reprogrammed Imperial security droid now loyal to the Alliance, K-2SO is an alarming sight standing within a secret Rebel base.    (Taken from Hasbro marketing materials.) 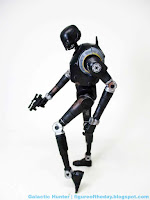 Commentary: I admit, I did not see the point of doing a new K-2SO now.  I still don't - the line ended 3 years ago and this droid stands as an island in a shallow sea of characters.  The previous 3 3/4-inch figures were fine - but this is better.  It stands  as a testament to just how good Hasbro is at making 5-jointed figures, and how good Hasbro is at hiding joints in super-articulated figures, that it's not obvious that one is at all an improvement over another.  It probably won't help sales either - in-pack, they look essentially the same.

This time around, Hasbro made hands that better grip the included pistol - that's a big plus.  Subtle dirt and damage appear all over the figure, from the silver you can't miss to browns you might not see unless you have this figure brightly lit.  With 25 points of articulation, this is a big step up from the 2016 figure and its many later variations, but you're probably going to be OK with what you have - for now.  If more Rogue One creations get toys, you'll want to make sure to get this upgrade.  Or a bunch of this upgrade, for future army-building and diorama-stuffing experience, if we ever get an Imperial capital ship or another installation.  Which I assume will not happen soon. 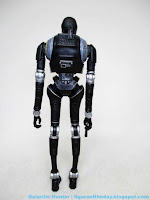 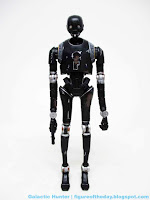